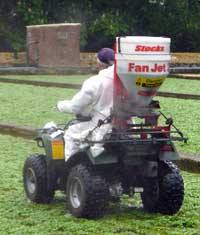 Farmers have been set a 2011 deadline to bring concentrations of metaldehyde in watercourses down to an acceptable level.

If targets to reduce levels of the slug pellet active ingredient were not met, the Environment Agency would be forced to take action, said independent water consultant Bob Breach.

“There is no magic number, but we need a further improvement on last year,” he said.

“Even if it is a wet autumn, this is absolutely critical and everyone needs to toe the line.”

Levels of metaldehyde detected in watercourses last autumn were significantly lower than previous seasons, due partly to more conscientious slug pellet use and because dry soils conditions meant fewer pellets were needed.

But the legal limit of 0.1ppb was still exceeded in a number of cases across the country showing more work needed to be done, said Metaldehyde Stewardship Group chairman David Cameron.

“We have achieved good awareness in the farming community, but we need to build on this. Reduced slug pressure last autumn will have been a significant factor in the 2009/10 results – but it could be a completely different story if pest pressure returns to more normal levels next season.”

Research carried out by the group showed 69% of farmers did not believe their land sat within a river catchment and in November 2009, 26% believed the way they applied slug pellets would have no impact of whether or not slug pellets were withdrawn.

But studies in the Cherwell valley catchment showed drainage was the most significant pathway for transferring metaldehyde to water courses, said MSG consultant, Colin Myram.

“Drainage losses accounted for 98.7% of metaldehyde entering watercourses and clearly the route is more important than we thought.”

Consequently, farmers should use the minimum amount of active ingredient to avoid drainage and runoff losses, he said.

“Also avoid spreading when heavy rain is forecast and when drains are running.”

The maximum permitted single application has been reduced to 210g of active ingredient/ha from last year’s 250g in the group’s revised best practice advice and the no-spread zone adjacent to watercourses has been increased from five to six metres.

“We can’t afford to lose this important active ingredient – it is vital that good results are obtained and slug pellet users must follow this voluntary advice and believe they can make a difference.”