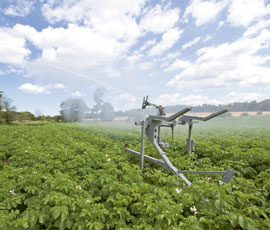 Drought conditions which have hit parts of the UK this year, could last into next summer unless winter rainfalls are higher than average, DEFRA has said.

DEFRA secretary Caroline Spelman said that groundwater levels were still falling in many areas and warned water companies and farmers to take precautions.

Even if there is average rainfall over the winter and spring, parts of central, eastern and south-eastern England are unlikely to see a full recovery from drought conditions in 2012, she said.

Anglian Water has already been given permission to pump river water into reservoirs.

“It may have surprised people that we’ve granted Anglian Water a drought permit in December, but it is a warning of the need to take action now after the country has seen the driest 12 months since records began.

“Everyone has worked hard to stave off any threat of hosepipe bans this year, and help keep our rivers flowing.

“Unfortunately, if we have another dry winter, there is a high risk that parts of the country will almost certainly be in drought next summer – so it’s vital we plan ahead to meet this challenge.

“Droughts are not new, but we may face a future with less rainfall and less certainty about when that rain will fall. That is why we will shortly be setting out our plans to ensure we have a safe and secure water supply in the future,” Mrs Spelman said

“The Environment Agency report [published on 1 December] urges all water users – especially farmers, businesses and water companies – to plan carefully how they store, use and share water.

“As we have seen over the spring and summer, drought has serious impacts on the environment, especially for wildlife, and we will continue to work with others to ensure a secure water supply, balancing the needs of people, businesses and the environment.”

The South East of England is now at a high risk of drought due to continued low rainfall and central, eastern and south eastern England are unlikely to see a full recovery from drought conditions during 2012. Parts of the rivers Colne, Nene, Trent and Kennet are also neared the lowest levels ever recorded for November.

The agency report set out further recommendations to water companies and other water users.

• Water companies to step up leak detection to make sure leakage is keep under control and keeping their customers informed of their situation and encouraging them to use water wisely;

• Farmers planning ahead for their irrigation needs, including options for scheduling their irrigation, filling their winter storage reservoirs and working with others through local water abstractor groups to share water resources

• Livestock farmers planning ahead for fodder and bedding supplies in light of prolonged dry conditions.