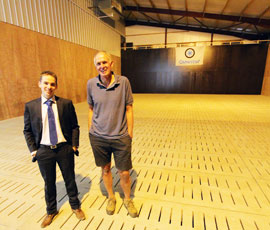 A grower co-operative in Norfolk aims to streamline its potato storage operations by investing in a more efficient Dutch-style system. Adam Clarke reports.

Grower storage co-operative Home Farm partners in Hindolveston, Norfolk, has become the first in the UK to invest in a fully ventilated concrete floor as part of its new 4,000t bulk storage potato store.

Designed by Dutch company Omnivent and constructed by Thurlow Nunn Standen and JD Cooling, the store comprises of four 1,000t bays and a covered loading area.

“Storage is particularly important for us as we grow crispers for Walkers and store long term until June to get a premium,” says Walter Hammond, one half of the partnership, which includes fellow grower Antony Seaman.

“We have now sold our previous store, which was 30 years old, with the choice of either investing in a new one or getting out of the potato industry altogether.”

The concrete drive-on floor installed in the store results in the best possible air distribution through the crop.

“The floor is fully ventilated, so the air comes up through the floor evenly across the whole store, resulting in perfect air distribution. You also don’t have the hassle of handling ducts during the loading and unloading process,” says Paul Kok of Omnivent.

“Although the capital investment is higher, it is a much better system for the crop and from a management perspective,” he adds.

The air is distributed by four fans in each 1,000t bay, which equates to a net airflow of 75ft cu per minute per tonne (cfm). Many UK stores are only designed to have a capacity of about 40cfm.

“The higher airflow capacity that we use cuts the amount of time the system needs to be running to maintain the correct environment in the store, resulting in more efficient drying and decreased energy use,” explains Mr Kok.

“There is also less dehydration of the tubers as they are being exposed to the airflow for a shorter period.”

Backpressure from an average potato stack is about 60pascals, says Mr Kok, with any further pressure created by the design of the storage systems.

“We always install a ventilation system with the capacity to deal with 150pascals and this store creates around 100pascals, so it is working well within itself for maximum efficiency,” he explains.

The Omnivent system comes with full automation and the option of a full touchscreen control unit displaying all the relevant information to the store manager.

“The set-up of the system is key to ensure there are no problems within the store and full training is provided for that, and each control unit is connected to us in Holland via the internet so we can monitor the system and provide advice when needed,” says Mr Kok.

The use of CIPC (chlorpropham) sprout suppressant for processing potatoes in the UK is currently fixed at 63.75g of active ingredient per tonne per crop, but in the continent it is much lower at just 33.6g.

However, the lower rate is likely to be forced upon UK growers within the next two years. “Growers need to be looking into the future and considering how their stores will cope with tighter restrictions on product use and residue levels,” says Mr Kok.

A major factor in Mr Hammond and his partner opting for the Omnivent system was the ability to rely on less application of CIPC in store.

“We are trying to reduce our CIPC use and reports from similar stores elsewhere say they have gone down to just two applications from the usual four,” says Mr Hammond.

“Walkers, our end market, is also very keen as there will be must less risk of exceeding residue levels,” he adds.

Traditionally in the UK, CIPC fog applications have been made through one or two high-capacity fans, increasing the risk of clogging due to more product going through fewer fans.

“That is why inverters are fitted to UK stores, to run the fans at lower speeds to prevent build up, but that comes with the problem of poorer distribution through the crop,” Mr Kok points out.

“In our system, the greater number of lower-capacity fans will have less product going through them and can be run at 100% capacity. This results in a higher net airflow and faster with more cycles through the crop.

“The chemical will therefore be distributed more evenly through the crop with less build-up in the system. That is particularly important if using above-ground ducts,” says Mr Kok.