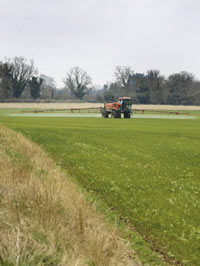 The Environment Agency has agreed to work with farmers using voluntary measures to implement the pesticide objectives of the Water Framework Directive.

A number of pesticides, particularly residual herbicides and the slug pellet active metaldehyde, had been considered to be at risk from the legislation if the agency opted to legislate rather than work with farmers.

But a positive meeting between the EA and Voluntary Initiative sponsors highlighted the contribution VI could make and resulted in a partnership being established to continue to improve standards of pesticide use. It will also target specific catchments where pesticides have been identified as posing a threat to water quality meeting the requirements of the directive.

Environment Agency chief executive Paul Leinster recognised the importance of voluntary measures in reducing the environmental impact of pesticide use.

VI manager Patrick Goldsworthy said the organisations had agreed a common goal and voluntary measures would play an important role in meeting these objectives.

NFU deputy president, Meurig Raymond supported the relationship and its recognition of the importance of voluntary measures in reducing the amount of key pesticides reaching water.

“We welcome the Environment Agency’s recognition of the Voluntary Initiative and its commitment to work with us on a voluntary approach.

“We strongly believe that voluntary measures can help us reach the challenging targets set by the directive and we must work closely with all partners to make sure that the necessary behaviour changes are made.”