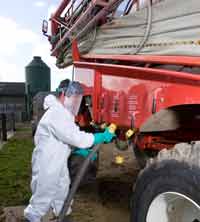 Pesticide use will become more acceptable to the public thanks to controversial changes to European pesticides legislation, according to the EU’s food safety directorate.

Michael Fluh, head of chemicals and pesticides at DG Sanco, told the British Crop Production Council congress on Monday (9 November) that the legislation would drive innovation in the sector.

“It is a regulation that is very forward-looking,” he said, “and one I hope will increase public confidence in how farmers produce food.”

But Mr Fluh admitted that politics as much as science had driven the changes.

“It is a political process that started seven years ago,” he said.

“There were clear signals from MEPs that it needed to look at cut-off criteria.

“We don’t want to support products that are dangerous or have negative characteristics. This is the evidence. It was a political discussion.”

The regulation would also help the minor crop sector, he added, despite many analysts fearing it would mean intensive production of some horticultural crops would become difficult.

“We want Europe’s farmers to be able to grow these crops and the new regulations will help by giving incentives for manufacturers,” he said.

Those incentives included longer data protection on active substances, preferential treatment for actives with minor crop uses when comparatively assessed against other active ingredients and the potential for a minor crop use fund in the legislation.