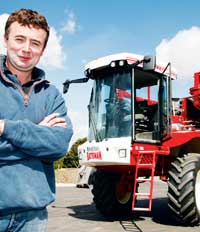 The return of dry, warm weather in early April made it possible to drill the remaining area of spring barley in perfect conditions.

Land dried out quickly in the warm, long days and conserving moisture became an issue we would not usually have.

We have only had 4mm of rain in the past month and early-sown spring barley certainly needs rain to wash in the nitrogen and promote growth. It’s been a while since we have had such a prolonged dry spell. It has given the late-sown crops the ideal opportunity, though, and they emerged quickly in the warm soils.

Winter wheat is fast approaching T1 and will be sprayed with 1.8 litres/ha of Opus Star (epoxiconazole + prochloraz) and 1 litre/ha of Bravo (chorothalonil) along with the second dose of growth regulator CCC (Cycocel). The addition of Sportak to the Opus helps improve the overall septoria control and trial work here in Ireland has indicated a higher yield response.

T1 is usually applied at the end of April/early May, with 21-day intervals, with T3 on the 10 June. Sticking to these timings is more important than the application rates of the products for septoria control in Ireland. If crops are advancing fast, it’s possible to go early with the application, but stretching the timing is risky if the weather is unsettled.

Expectations for the coming harvest are good. With some good harvest weather we would hope to have the harvesting completed in two weeks. The half and half split or early and late sown barley will help spread the ripening and make the harvesting manageable with the early crops in the same area.