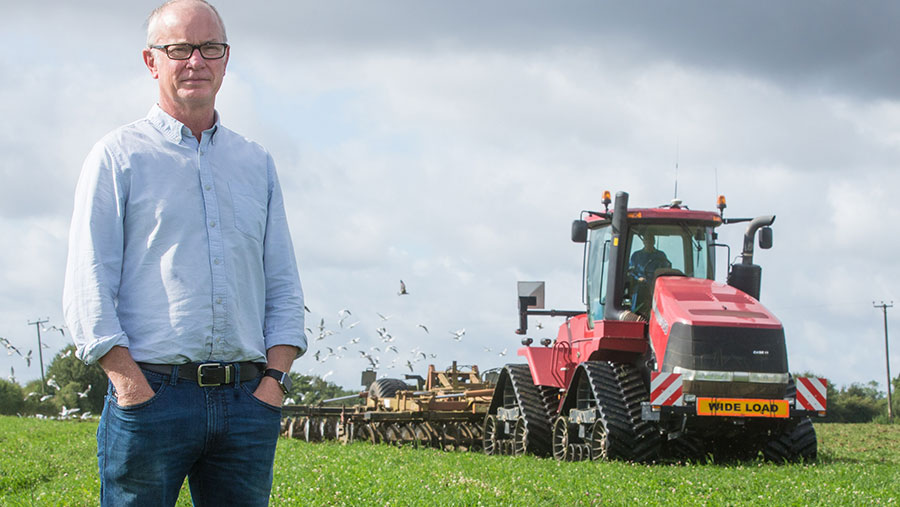 Viewing our spring work load from December looked like a pretty daunting task.

Having only ploughed land ahead of winter beans, our min-tilled land due for spring sowing was looking decidedly green, with copious volunteers and a healthy carpet of blackgrass.

Newman Turner, author of Fertility Farming, welcomed his mass of over-wintered weeds as a free green manure, whereas I have been rather less laid back about how, with as little ground disturbance as possible, I was going to deal with the weed burden that faced me.

I was then delighted to be presented with the relatively early opportunity to start drilling.

We started pulling land down on 22 February and drilled our first field on 25 February.

Winter concerns about weed eradication had prompted us to double-check tine spacings on our pre-drilling cultivator and re-fit wider tines to ensure that every weed would be cut.

Thankfully that attention to detail has paid off and the majority of fields have sufficed with a single pass with either our Horsch Terrano or Gregoire Besson Discordon in the autumn, and two passes with the Dalbo Culimax pre-drilling.

I also took the decision not to roll post-drilling, leaving any errant suspects on the soil surface to be easily dislodged post-emergence with either our Einbock harrow comb or Cameleon hoe.

It will also have the advantage of leaving a good tilth to under-sow into. Rain has currently stopped play, but crops have germinated and with half the work done in perfect conditions I am more relaxed about the remaining 250ha to sow.

However, I am not as relaxed about the potential of a no-deal Brexit scenario for UK organic farmers.

In that situation the EU will no longer recognise UK certification bodies until they have approval from the European Commission, which could take up to nine months.

In a sector worth £2.3bn, and almost 10% of that being exported, no-deal poses a considerable challenge for some of our organic businesses.