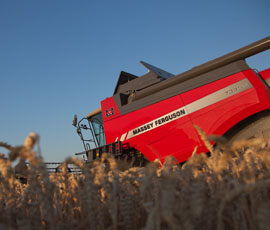 Harvest is almost over and done with in County Down, Northern Ireland, after a week of frenetic activity.

“This time last Saturday nothing had been cut, but another few days and we will see it finished,” said Charles Davidson at North Down Grain.

“We had a tremendous week last week, and farmers got almost everything cut and baled in a week – crops were coming in at 16-18% moisture by the end of the week as they were really very ripe.”

Rain yesterday (10 September) had halted further activity, and nobody had managed to drill oilseed rape yet, he added.

“There was very little winter wheat drilled as the back end of the season was so bad last year, so it’s mostly spring barley around here.

“It’s yielded really quite well, and is better than the winter barley, which didn’t go into very good conditions last autumn.”

“What wheat there is has had lower bushel weights than usual, at 68-70kg/hl, so it hasn’t yielded as it should have done.

“The wheat quality has really been very poor – you can put all the sprays and fertilisers on that you want, but if the sun doesn’t shine you can’t do anything about it.”