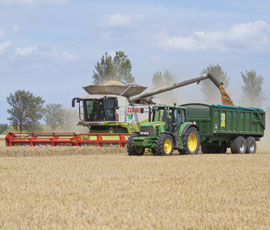 Combines have been busy near Inverness today (24 September), ahead of forecast gales and showers.

“With the weather due to break tomorrow, we’re unlikely to do much more by the end of the week,” said Simon Barry, chief executive at Highland Grain.

Farmers had about 5% of their spring barley and 5-10% of their wheat left to cut in the area. “Yields have been mixed – the wheat has done reasonably well, considering the year.

“They’re not good yields, but are probably about average. Quality has been generally pretty good, with bushel weights at 72-78kg/hl.”

Spring barley yields were also mixed, and about 5-10% below last year, said Mr Barry. “Quality is very good in the main; we have had some skinning problems but not as much as elsewhere.”

Spring oats had done quite well, yielding at least average, despite lower bushel weights, he added.

Farmers had finished drilling oilseed rape and winter barley in the area, with 50-60% of the wheat now in, too.

“There are some dreadful yields there, with hardly any wheat or spring barley in the average bracket.”

Farmers in Aberdeenshire and East Lothian still had wheat to combine, but harvest was nearing an end elsewhere. “For some, it really will be a harvest to forget.”