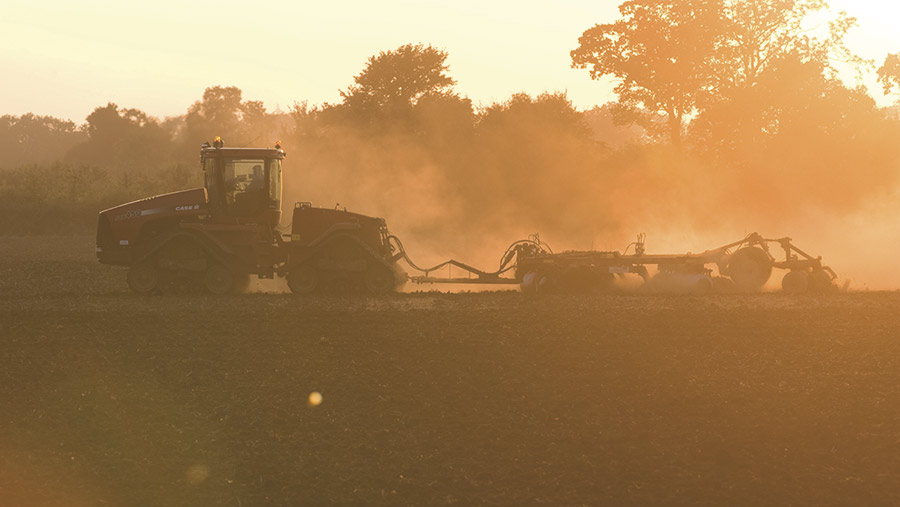 Although each farm suffering with a blackgrass problem will need its own strategy to tackle the UK’s number one weed problem, there are principles that every farm should be building their plan around.

Growers need to be flexible, drill later and be prepared to change rotations to stay a step ahead of the competitive weed and reduce the seed burden returning to the soil.

See also: How to use integrated methods to control blackgrass

Making the wrong choices can cost growers hundreds of pounds in lost revenue, according to research by agronomy group Agrii, so modifying the crop planted as well as the cultural and chemical tools at their disposal to suit the season and the situation is vital.

The latest results from the company’s long-term trials at Stow Longa show that growers must keep enough flexibility in their cropping plans in order to be able to react to problems with the right cultural and chemical tools.

Faced with a difficult blackgrass population, the difference between being proactive and taking no action can be worth up to £900/ha in gross margin, stresses agronomy manager Colin Lloyd.

“Indecision doesn’t work,” he says. “There isn’t a blueprint because every farm is different, but there are principles.”

The results from their rotation trials show that all the good work done in one year can be easily undone by poor decisions in the following season.

However, growers who find themselves with an increased weed burden after a difficult season should be reassured that getting things wrong in one year can be put right with good decisions in the next year, but big reductions in blackgrass will be seen only from stringing multiple seasons together, he says.

Having established a new series of trials in 1ha blocks in 2014/15 to look at a range of different rotations and cultural regimes, Mr Lloyd reports that improvements in blackgrass numbers have been seen in three of the rotations.

“However, two of them have been backward steps. It all depended on the crops that we chose and the way that we established them.”

Previous work at Stow Longa has demonstrated the value of rotational ploughing and the use of delayed winter wheat drilling.

When sowing was moved from the end of September to the end of October there was an average of 41% extra yield delivered by later drilling over a four-year period, which was worth £360/ha a year.

Similarly, changing one factor in the cultivation sequence by going from min-till to ploughing gave 80% control.

To build on that research they decided to investigate how the weed interacts with rotations and what management is required to stay ahead.

After two years of results from the rotational choices work, spring cereals have shown to be better for both blackgrass control and profitability than winter wheat, where there is a history of serious weed problems, as expected.

However, growers shouldn’t expect a spring crop to keep blackgrass under control without the most appropriate establishment method, involving minimal soil disturbance.

Likewise, two successive spring crops aren’t the answer, either, unless they are managed correctly.

“These things aren’t enough on their own but they can work well if you drill later or cultivate differently, so the right management is essential,” stresses Mr Lloyd.

Winter beans have been interesting as their margins have been modest, but the results showed that they have given the lowest levels of weed seed return of any crop in both years.

Late August sown cover crops gave a different result and Mr Lloyd says that the jury is still out on their role in blackgrass control.

“They gave us higher blackgrass numbers in most cases. But they also boosted wheat yields and operating margins, so they seem to be contributing in other ways.”

He sums up by reminding growers that management flexibility is the priority for blackgrass control.

“You can correct a bad situation quickly with the right approach. But that means using all the tools, looking at individual fields and considering the season.”

What have the latest results from the Stow Longa research centre shown is the most effective crop for controlling blackgrass?

At Project Lamport in Northamptonshire, seed and spray supplier Agrovista is developing an approach that will help growers to get reliable results from drilling spring crops on heavy land.

“Getting a consistent outcome from spring crops on thick, sticky soils is a challenge,” says Stewart Woodhead of Agrovista.

“We know that they are a key component in blackgrass control, but getting a good seedbed in the spring can be difficult.”

Cover crops can help, he believes, by conditioning and drying the soil over the winter and allowing direct drilling of the following spring cereal crop.

“In a blackgrass situation, minimal soil disturbance in the spring is important,” he says. “So you make your spring seedbed in the autumn and use the cover crop to hold the soil together, before destroying it four to six weeks ahead of drilling.”

Cover crops can also have a role in blackgrass control, providing the right species are selected, he maintains.

In grass weed situations, those with low autumn biomass allow blackgrass to germinate in the crop, so that it is controlled when the crop is burnt off.

He says this approach can give very high levels of weed control, but that it’s also important to grow a very competitive spring crop afterwards, so a high seed rate of 500 seeds/m² will be required.