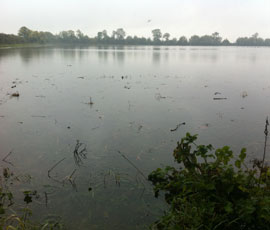 This dramatic flood scene was captured by a farmer in Oxfordshire in a field earmarked for winter wheat.

Arable manager Mark Wiseman had turned up at Manor Farm in Marcham, near Abingdon, expecting to apply slug pellets to the 10ha field.

Mr Wiseman had been hoping to complete final preparations for the field – ironically named “Duckpuddles” – ahead of drilling a crop of winter wheat later this week.

However, about 75% of the field is flooded with up to 1ft of water in places, and unless the rain stops, it looks unlikely that a crop will be drilled there this autumn.

“We had delayed the drilling for the blackgrass to emerge so that we could spray it off.

“The plan was that I would go out there this morning (Monday 8 October) and put slug pellets on there, but I don’t think we’ll bother now. Most of the slugs will have drowned and been washed away.”

Mr Wiseman recorded 15mm of rainfall at Manor Farm overnight on Friday (5 October) and the field flooded after water levels rose in the River Ock and flooded farm fields.

The rain fell on ground that had already been saturated by successive weeks of wet weather.

To make matters even worse, Mr Wiseman had drilled a 6m buffer strips of floristically enhanced grass margin features (HE10) under the farm’s Higher Level Stewardship (HLS) agreement around the field.

“The slugs had probably chewed a bit of the seed, but I’m guessing that the seed will have washed away,” he said.

Pete Martin, head of flood strategy at the Environment Agency, said: “River levels are receding, but it will take time for floodwater to subside. Floodwater is dirty and poses a risk to public health. The public should stay out of flood water and follow instructions from the emergency services at all times.”

The Met Office said the country would likely see a “north-south divide” in the weather this week.

“From Thursday onwards, cloud will increase across most of the UK.”

However, parts of England, Scotland and Northern Ireland where the cloud lifts could see overnight temperatures falling to freezing or even lower, Mr Williams added.

“Some isolated rural locations could see temperatures fall to about 0C or lower, so for some farmers, there is a risk of widespread frost.”

Add your flood pictures to our Wet Weather gallery