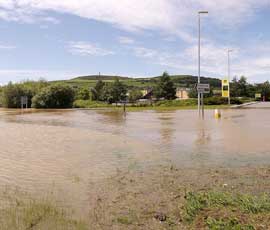 Flooding has halted all land work in mid-Northumberland, where David Watson is relieved to have finished harvest at Cockle Park Farm, Morpeth.

However, he now had growing concerns for establishing the next crop.

“I think from an agricultural point of view, in some respects this year is worse than 2008 was,” he said.

With a recorded 79mm of rain last night (September 25), Mr Watson had a crop of rapeseed under water.

“We have water flowing over our rapeseed and it’s also flowing over, not under, the bridge of the local river,” he said.

“We’ve had to bring all the cows inside, it’s so wet.”

With police cars limiting access onto the main road, broken down vehicles blocking side roads and one local village flooded, concerns were growing for what had already been sown, as well as what was left to sow.

“I’m pretty worried, as it doesn’t look good. The rapeseed was coming along a treat and then we had all this rain. It’ll be half way to Holland now.”

Harvest had also been a damp affair, with wheat yielding about 7t/ha and bushel weights at around 72kg/hl.

“Bushel weights were fine – we had no problem at all. But you sit on the combine and think it’s a 10t/ha crop and it comes out much less,” said Mr Watson. “We just needed more sunshine really.”

With harvest complete, establishing the next wheat and barley crops was going to be a chore.

“We’ve got 20ha of wheat in the ground and 10ha of barley but we’ve had to wait to get crops off – we’ll still be shifting straw in October,” he added.

“We had a brilliant drilling day on Sunday and the ground was drying up nicely, but now it’s soaked again. One dry day is no good for man nor beast.”