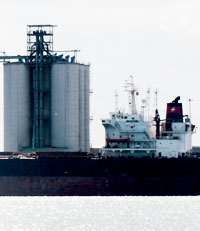 Frontier Agriculture is sending 55,000 tonnes of UK wheat to Vietnam, and loaded the MV Lioness at Southampton Grain Terminal at the rate of 7000t a day over the past week.

The Panamax vessel is thought to represent the first deal to Vietnam for UK feed wheat and the sale will significantly reduce grain carry-over stocks into the new harvest year.

In a joint venture with Hampshire farmers, Frontier has invested in a new, high-speed grain drier at Southampton, due to operate from August, allowing the company to increase export capacity particularly for certain destinations which require lower moisture contents.

Frontier already exports more than 1m tonnes of grain from the UK, mainly to other EU member states and North Africa.

The new drier may help to open further non-EU markets and will allow exports through SGT to expand from the current 350,000t a year.

The Lioness is bound for Vietnam via the Panama Canal.