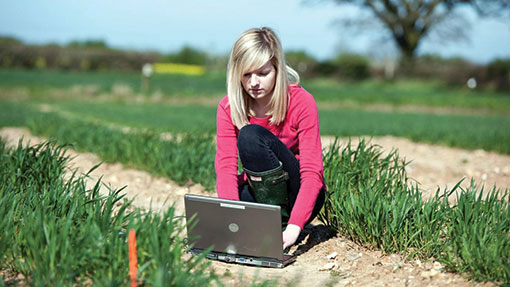 A wet summer two years ago saw the characteristic stunting of the wheat crop and premature plant senescence that led to yield losses of about 2t/ha. Typically, the disease was most prevalent in consecutive wheat crops grown in the second or third rotation position, but also in first wheats, where there was poor control of grass weeds and cereal volunteers in the previous non-cereal crop.

This project aims to improve resistance to take-all in wheat varieties by exploiting desirable genes and possibly the antagonistic behaviour of a related fungus.

Whether or not 2014 will be a “take-all year” depends on the amount of rainfall between March and early June, she says. Moist soils encourage inoculum build-up of this ubiquitous fungus, which attacks and weakens the plant’s root system and consequently reduces water and nutrient uptake.

While seed treatments offer some protection, the ideal way to minimise field losses in second wheat is to exploit genetic resistance. Prof Hammond-Kosack is currently supervising a PhD student with this goal in mind.

“Our dream is to find significant differences between varieties in their response to take-all, and to mark the relevant genes so that plant breeders can take advantage of them in wheat breeding programmes. Ultimately, we would like to produce resistance ratings to enhance the HGCA Recommended List.”

It’s a particularly tough challenge since research over the past thirty years has failed to identify any good sources of take-all resistance in hexaploid wheat germplasm. There are suitable genes in rye that can be exploited when producing hybrid triticale. However, others have attempted to incorporate rye resistance into wheat but failed.

By starting with previously unused novel breeding material, postgraduate student Sarah-Jane Osborne is confident she will find some natural variation among wheat lines.

“The DEFRA-funded Wheat Genetic Improvement Network and the BBSRC-sponsored Wheat Improvement Strategic Programme have focused our attention on certain promising lines for our field trials. We will be measuring soil moisture, differences in maintaining root growth and function, and yield for three seasons,” she says.

The trial is sited in a field that has supported two previous wheat crops, using the highly-susceptible variety Hereward as a control. Miss Osborne is using the take-all index of 0-100, previously devised at Rothamsted. In 2012, Hereward and Robigus were at 70-80 on this scale, while the Danish variety Hereford was at 50. Currently, the most promising hexaploid wheat material is scoring 30.

She is also examining the relationship between take-all and a related, naturally occurring fungus called phialophora. There is evidence in the literature that winter wheat varieties easily colonised by this species may have the potential to suppress take-all infection.

If modern Recommended List varieties are susceptible to phialophora species and the yield penalty isn’t significant, this could offer an additional method of controlling take-all, suggests Prof Hammond-Kosack.

“We already have seed treatments, including Latitude and Jockey, and the foliar fungicide Amistar in the armoury. Reducing the effects of take-all by genetic means and possibly also by fungal antagonism could bring growers more flexibility in managing wheat in the future.”

“The second wheat position can be a challenge in many rotations and take-all is a key reason for that. In the long term, varietal resistance is one of the best ways to minimise losses from this disease. The outcome of this project should guide other researchers and plant breeders in developing more resistant varieties.”