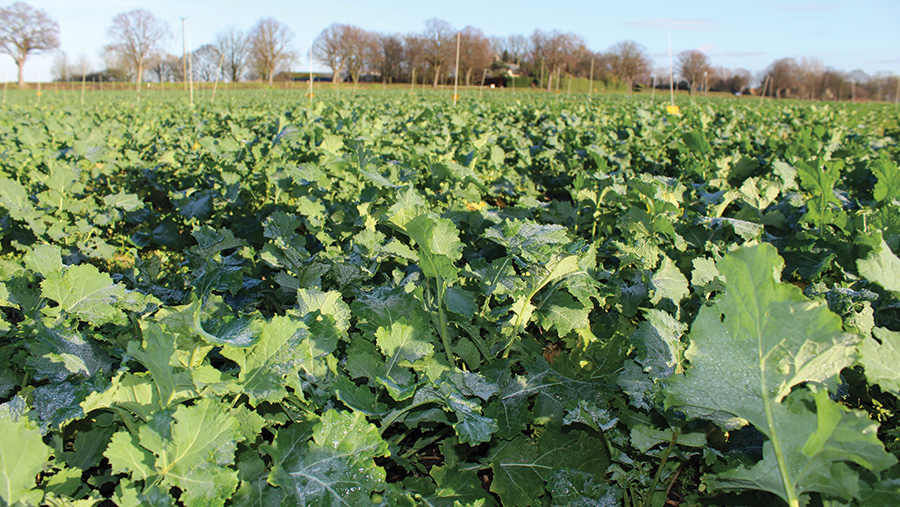 After the warmest December on record and only an occasional frost in January, some crops in central and eastern England are showing early signs of flowering.

Experts say with low rapeseed prices, growers will need to be spot on with their canopy management to prevent a severe hit to profits at harvest.

They add that there is the potential to cut nitrogen fertiliser by up to half this year to keep these monster crops under control.

Pete Berry, senior research consultant at Adas, tells Farmers Weekly that many crops are near a tipping point where the mega-growth could become either a serious problem or a welcome cost saving.

This season the more vigorous and early maturing varieties, which were drilled in July and August, are further forward than last year and will need careful management in the spring.

“Crops that have taken up more nitrogen will generally require less fertiliser and there is a good chance that growers can cut their nitrogen costs by as much as 50% for the biggest, most forward crops,” he says.

Lodging is the primary risk to crops that have grown well ahead of where they ought to be at this stage, and in an average year about 35% of the oilseed rape area is lost to lodging, potentially reducing yields by up to half.

Even if lodging does not occur, yields can still be hampered, says Dr Berry.

“There is a risk that the plants will effectively outcompete and shelter each other, blocking sunlight which can affect seed numbers and filling on lower pods, ultimately restricting yields,” he explains.

“We’ve found that having too big a canopy at this growth stage can reduce yields by about 0.4t/ha,” Dr Berry adds.

In the rarer cases where crops have raced into the early stages of flowering, Dr Berry says this is likely to have an impact on yield with pods more likely to abort before harvest.

Growers need to be examining crops in February to strike a balance between growth regulation and a cut in nitrogen, if crops are vastly ahead of normal growth.

“The first thing growers should do is look at the canopy size and take a green area index (GAI) reading in February,” he says.

Tools such as BASF’s smartphone app are free to use and give a good reading of GAI which shows how dense is the crop.

“The target GAI will be 1-1.5 units but there will be crops that are double that at the moment,” he says.

If a crop is at a GAI of 3, he advocates cutting off a 1m sq area at ground level, weighing it in kilogrammes and then multiplying the weight by 0.8 to get an accurate GAI figure.

He adds growers should bear in mind that each GAI unit is equal to 50kg/ha of nitrogen, meaning a crop that hits a GAI of 3 units will have 150kg/ha already.

“Many areas have had a lot of rain this winter which will have leached nitrogen out of the soil,” Dr Berry says.

“However, the mild temperatures will have encouraged mineralisation so we don’t know quite what these conflicting factors will have done to nitrogen levels in the soil.” he adds.

If growers are concerned about the amount of nitrogen left in the soil, he suggests nitrogen soil testing may be worthwhile.

“I recommend that growers who have crops with a GAI of more than 1.5 delay the first nitrogen split application until the stem extension/green bud growth stage, pushing it back until at least the beginning of March,” he says.

For a crop at 1.4 GAI, work by fertiliser group CF Fertilisers shown that leaving nitrogen until April can boost yields by 0.4t/ha.

When it comes to growth regulation, Dr Berry points to a study into the effectiveness of azole fungicides which found that plants above 0.8 GAI respond positively to metconazole and above 1 GAI to tebuconazole, measured just prior to the start of stem extension.

This means any large crop will respond well to a plant growth regulator (PGR), it’s just a matter of when growers can get on to spray.

The mild winter also means the two of the most serious oilseed rape diseases, phoma and light leaf spot, have been present in many crops since mid-November.

Light leaf spot, the crop’s most economically damaging disease, is set to be very serious this season because of the wet and mild weather, and growers are keen to spray as soon as they can travel on the ground.

Dr Berry says crops with large leaves may be able to cope better with the heightened disease risks this season, as any phoma infection will take longer to spread from the leaf to the stem where it causes greater yield loss.

In Bedfordshire, grower and contractor Matt Redman says crops in his area are growing well and he is considering adjusting his canopy management plans.

Crops are about knee high and have thick canopies, but being so high and thick has helped keep the pigeons off. He says in terms of growth stage that crops aren’t much further on than normal.

“No doubt this will mean some changes to what we do in the spring, easing off the initial nitrogen application at least or delaying it slightly.

“Crops will have a fair bit of nitrogen already so hopefully we can make some savings,” he says.

Mr Redman stresses it’s a fluid situation, as some crops that were looking very proud have been knocked back slightly by some colder days in January.

“It means that I’m keeping an open mind at the moment as a lot could change in the coming weeks if February turns out to be a cold month,” he adds.

David Leaper, oilseed rape expert at agronomy group Agrii, says high flea beetle pressure in East Anglia saw many growers rushing to drill their crops as early as possible and this, plus some opting to drill at a higher seed rate, is part of the reason for monster canopies.

“We often worry about having too thin a canopy so this is actually quite a good problem to have,” he says.

Big differences are being seen between varieties which means growers will need to tailor PGR fungicide treatments to suit individual varieties in relation to their maturity and disease resistance.

He says there is a better arsenal of PGR products with the introduction of products such as Caryx (mepiquat chloride + metconaozle) which is effective when used at stem extension.

Mr Leaper adds that tebuconazole is fairly weak as a PGR and instead he suggests using Toprex (difenoconazole + paclobutrazol) at up to 0.35l/ha, which he says has given good height regulation in trials and will help minimise the lodging risks.