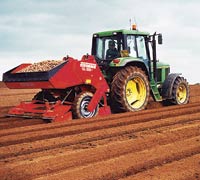 A trial plot of genetically modified potatoes is to be planted at a secret location on a farm in Norfolk.

The planting was set to go ahead on Tuesday 8 June to test whether genes from two wild varieties could help protect plants from late blight.

Previous potato trials have been vandalised and £20,000 has been spent on security at the farm to keep out anti-GM campaigners.

Jonathan Jones from the Sainsbury Laboratory, Norwich, told the BBC that unlike recent small-scale, plot-based trials this latest study monitored blight resistance in a field setting.

“UK potato growers spray crops 10-15 times a year and in 2007 Europe ran out of chemicals to control blight, it was such a wet year,” said Professor Jones.

“If our research is successful, this will cut chemicals and carbon dioxide generated by the use of tractors.”