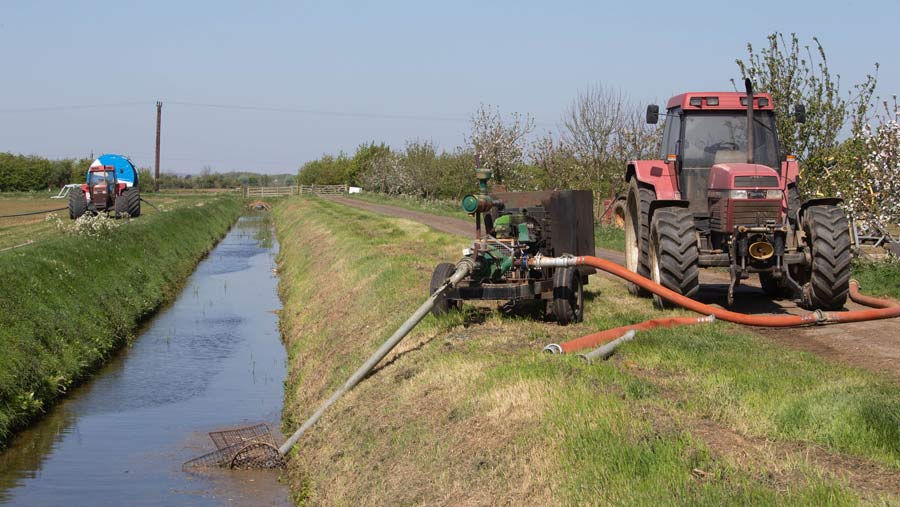 The government is consulting on plans to modernise and simplify the system for water abstraction and most other environmental permits in England and Wales.

The proposals require changes to the Environmental Permitting Regulations (EPR) legislation, which will require parliamentary approval. The government intends to lay secondary legislation before parliament in 2022 for implementation in 2023.

NFU water resources national specialist Paul Hammett said there is a “shake-up” coming over water abstraction and licensing, which will be introduced gradually by government.

“Farmers need to use the time to understand what the implications of the changes to water abstraction licensing will be on their business and plan accordingly,” he said.

“Nothing is going to happen immediately, but you need to start getting on top of it now. It will be a gradual process, transitioning over five to six years.

“Broadly speaking, the changes will involve increased flexibility for some people, but I suspect for everyone there will be more paperwork and less secure access to water.”

Mr Hammett said the NFU had just been given sight of the latest consultations and will investigate their content thoroughly and submit its response to Defra in 12 weeks’ time.

Mr Blenkiron said: “I think it’s probably the right decision to move most of the water abstraction and other environmental permits under the EPR into the one place.

“But I am concerned that some of the legislation that the abstraction licences will be moved into gives the potential for the EA to remove permits without any form of compensation in the future.

“The EA says they can already remove licences without compensation now. But people need to be fully aware that this is one of the big risks.”

An earlier EA consultation, which opened on 18 August and will close on 10 November, proposes higher payments for new or amended abstraction licences in the future.

Modernising the abstraction service is a key aspect of Defra and the EA’s joint 2017 Water Abstraction Plan, which sets out planned reforms for water abstraction management over the coming years and how these will contribute to the delivery of the goal in the government’s 25-year Environment Plan for clean and plentiful water.

A separate consultation has been launched that looks at changing the EU’s powers on groundwater towards an updated risk-based approach.