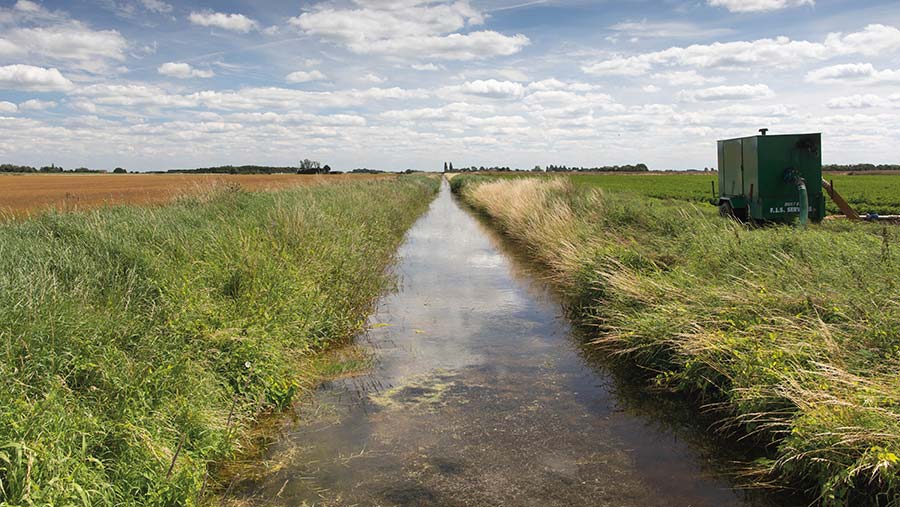 Farmers in England can expect to pay considerably more for new or amended abstraction licences in future, if new Environment Agency (EA) proposals come to fruition.

The plans are set out in a new consultation, launched on Wednesday (18 August), which is intended to deliver a complete overhaul of the way licence holders are charged for abstracting water.

According to the EA, the UK is looking at a 23% increase in water demand by 2050, and significant investment is needed to avoid shortages in certain parts of the country.

“The proposed changes to the water abstraction licence charges will allow the EA to do more to protect our rivers and chalk streams, to manage our water resources better, and to sustain supplies into the future, helping us secure long-term water resilience,” said EA chief executive Sir James Bevan.

All businesses are required to have licences if they take more than 20cu m a day from a river, stream, canal or groundwater – and the current charges have not changed for 10 years, says the EA.

Under the proposals – which will see charges based on the volume of water taken, the source and the amount returned to the environment – around 48% of farm abstractors will see their annual charges increase, while 52% will see them decrease.

But new licence applications and variations are set to increase substantially, “in line with those charged for other permitting regimes”.

The consultation document runs to 31 pages and is accompanied by numerous other papers and impact assessments.

Higher charges will still apply in restricted water areas, and additional fees may kick in if extra work is required of the EA, for example if a conservation assessment is needed, or public consultation for larger schemes.

Annual abstraction charges are less drastically affected. The example given in the document shows that a spray irrigator, using 99 megalitres a year, would see the annual charge fall from £2,181 to £1,783 using the new formula.

The report says that 60% of farmers use less than 100 megalitres a year.

Farmers are urged to have their say on the consultation

“The proposed charges bear little resemblance to the market value of water – it’s more about the Environment Agency recouping their costs,” he told Farmers Weekly.

“Having said that, the EA needs to be fit for purpose, and we are pleased with the level of engagement so far.”

Mr Hammett confirmed there would be winners and losers from the review process, and predicted some steep rises for new applications.

He also predicted that water abstraction rights would change in some cases, to take account of things like climate change and local environmental protection requirements.

“Some farmers have enjoyed abstraction rights for years with little change, but the system will become more fluid because of longer-term regulatory change,” he suggested.

However, Mr Hammett welcomed two aspects of the consultation that could have been problematic.

First, the two-part tariff mechanism for irrigation, which recognises erratic use depending on rainfall, is set to remain.

Second, the principle of reservoir discounts, based on seasonality and higher river flows in winter, will also be retained.