Herbicide-resistant blackgrass is being increasingly seen in sugar beet crops and growers cannot afford to see yields suffer, given the low beet prices in recent years.

Losing control of the weed and allowing seed to return will also have an impact on the rest of the rotation.

Mr Drinkwater admits that a failure to get on top of it would eventually force a change in farming policy, with far-reaching implications.

“The implications are not always practical and there are obvious consequences for farm profitability so we need to find a way through this problem,” he says.

Mr Drinkwater is hoping to improve his success by targeting blackgrass post-emergence.

However, blackgrass is not his only problem and any change in tactics must not be at the expense of controlling a high broad-leaved weed burden. 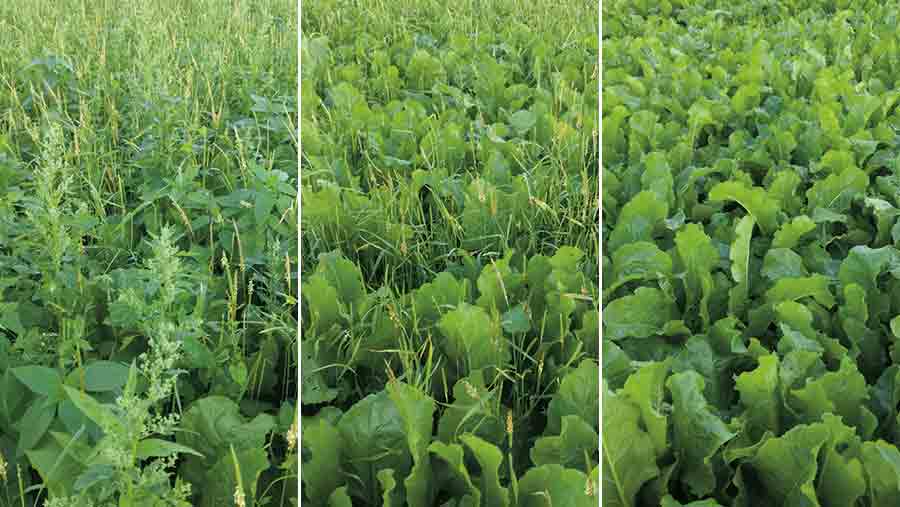 Left to right: weeds in an untreated control area, in a strip with no Centurion Max applied at T1, and the best results

So when Bayer approached him earlier this year to conduct a weed strip trial in a field of sugar beet, he had no hesitation in accepting.

“We need to learn more about our situation. We had been successful in controlling blackgrass for several years through various herbicides, but with performance declining due to varying susceptibility, it is becoming harder to control across the rotation.”

Weed control within sugar beet at Abbots Ripton has typically focused on pre-emergence products with good residual activity, before tackling the broad-leaved weeds. Then Mr Drinkwater returns to kill off the remaining blackgrass later in the programme.

The trial looked at how ethofumesate could be best utilised while staying within a pre-emergence application of 500g/ha (see table of post-emergence treatments). Trials have shown that this approach to pre-emergence control can halve populations, compared with other strategies.

Across the trial, the best results were seen in plots that received Centurion Max (clethodim) at the T1 timing followed by Betanal maxxPro at T2 and Ethosat 500 at T3 and T4.

The clethodim, however, did such an effective job at tackling the blackgrass at T1 that the trial became focused on how best to tackle those blackgrass plants that survived through to seed, while controlling the broad-leaved weed burden.

“In retrospect this was quite favourable, as it gave us an illustration of how we can refine our tactics to minimise eventual seed return,” says Mr Drinkwater.

By late June it was evident that ethofumesate has a valuable role to play, but that product selection is important to avoid exceeding the three-year limit of 1,000g/ha when applying high rates at the pre-emergence stage.

“One of the lessons from this trial is that by switching to the better-formulated products, such as Betanal maxxPro, we can fit broad-leaved weed control in around accurately timed graminicides.”

Bayer root crops product manager Ed Hagues, who worked with Mr Drinkwater to develop the trial, says it proved the need to hit the weed hard, while maintaining the flexibility to adjust tactics as the situation unfolds.

“The trial highlighted the need for different modes of action when tackling blackgrass; no one product should be relied on,” says Mr Hagues.

Ethofumesate, metamitron and clethodim all work differently, and along with the other modes of action across the rotation they can be used, he believes, to reduce seed return, while managing resistance.

“We would have hoped for better control from the ethofumesate earlier in the programme, but perhaps due to the organic content of the soil or a quirk of the season we didn’t see the performance we hoped to see.

“Instead, we have a trial that considered how to maintain the flexibility needed to adapt to an evolving situation, while achieving desirable control of broad-leaved weeds and limiting the blackgrass seed return,” says Mr Hagues.