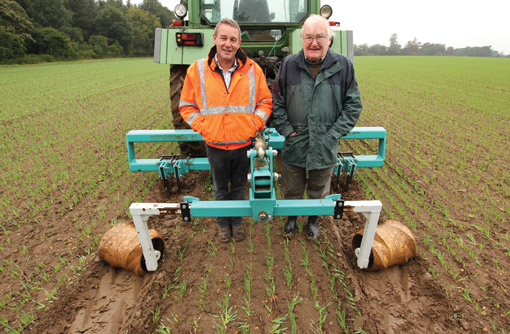 One retired Yorkshire grower-cum-inventor has come up with an innovative solution to reduce tramline run-off and protect two precious natural resources.

In the farm office at Home Farm, Nacton, Suffolk there are various certificates and awards adorning the walls, including those from Linking Environment and Farming (LEAF) and the Soil Association.

About 140ha of the farm’s 1,010ha of arable land is under Soil Association organic certification, with further land in organic conversion. The rest falls under LEAF certification.

With certification schemes such as these, it is clear the management ethos of the farm – part of the Orwell Park Estate between Ipswich and Felixstowe – is sympathetic to the environment.

It’s no surprise, then that farm manager Andrew Williams has been quick to adopt innovative solutions to reduce the farm’s impact on the environment, as well as making production more efficient.

Soil and water are the two most vital resources for food production and with 76% of England’s land area under agricultural management; they are resources over which farmers have greatest influence.

Some of that influence has been negative, with agriculture a large contributor to diffuse pollution that threatens 80% of our rivers and 75% of groundwaters.

Mr Williams has been attempting to reduce that impact across his predominantly light, sandy soils that are prone to wind and water erosion, particularly in his potato and wide range of vegetable crops.

He began with the Aqueel, a machine that leaves indentations in raised beds to help with water retention, and the Briggs Irrigation Tied Ridger that creates evenly spaced dams to prevent water running down wheelings.

In England it is estimated agriculture accounts for:

“The main driver was reducing diffuse pollution and nutrient loss and we have invested around £2m in our irrigation systems, so we want to keep our water where it’s needed,” explains Mr Williams.

Using the Aqueel on his undulating potato and vegetable fields proved effective for retention of water within the bed, but Mr Williams soon experienced practical problems with the Tied Ridger.

It cannot be used in sprayer tramlines and with the bunds not aligned between wheelings, a rough ride was guaranteed for topping and harvesting operations in potatoes.

Also, with the potato harvester bouncing over the ridges created in the wheelings, it was difficult to maintain a level web and correct shear depth.

“We also noticed that in heavy rainfall run-off could be compounded rather than solved as the water breaches the bunds, gains momentum and washes out the row,” explains Mr Williams. 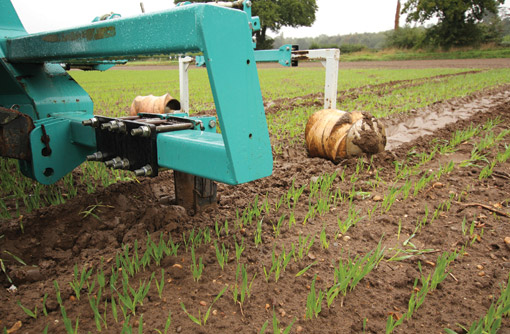 The inventor of the Aqueel is retired farmer Charles Creyke, who farmed near Masham, North Yorkshire, and he was soon getting calls from growers like Mr Williams with similar problems.

Mr Creyke has always had a flair for innovation, having developed the first stone and clod separator for potato ridges in the early 1970s, which was snapped up and put into production by Grimme and Reekie and still going strong today.

“That set the ball rolling in terms of innovation and wherever I have identified a problem, I have tried to solve it and I have had some successes and some failures,” says Mr Creyke.

He now heads Aquagronomy, a firm that specialises in soil and water solutions for farmers.

So when confronted by the problem of wheeling and tramline run-off, Mr Creyke went about developing a solution that achieves a reduction of that run-off, but is also practical and fits seamlessly into the farmer’s system.

“I identified that we needed a completely different design in order to make the whole field safe from run-off,” he says.

The Aqueel ensures that beds are holding the water from rainfall and irrigation, but in wheelings and tramlines there is the perfect channel for water to flow.

However, the concept of the Aqueel in those channels could not work as they contain compacted soil and not the soft, friable soil in raised beds.

“So I created a similar concept, but changed the shape and angle of the roller to create a ‘slip and scour’ action, which is also self cleaning to avoid soil pick-up,” explains Mr Creyke.

Made from high-tech tough plastic that is high-slip and low soil adherent, the Wheel Track Roller follows leading tines that create angled channels away from the compacted tramline or wheeling for water to escape.

The roller then creates reservoirs and surface fissures that hold surface water and aid absorption into the angled channels. 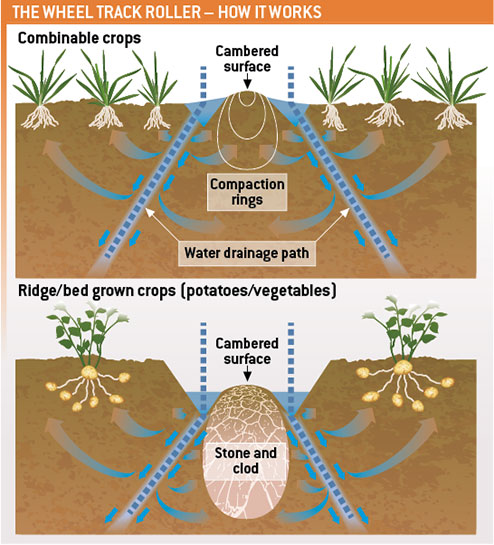 The water is subsequently kept away from a compacted convex-shaped centre that stays firm for traffic such as sprayers (see diagram above).

The results from Mr Creyke’s creation have been outstanding, with DEFRA undertaking studies as part of the mitigation of phosphorous and sedimentation (MOPS) II project.

It found the Wheel Track Roller is significantly better than the other options available at reducing tramline run-off.

The reduction in a potato crop was even greater, where a combined irrigation and rainfall of 243mm produced just 2.4mm or 1% run-off from the field area when the machine was used. 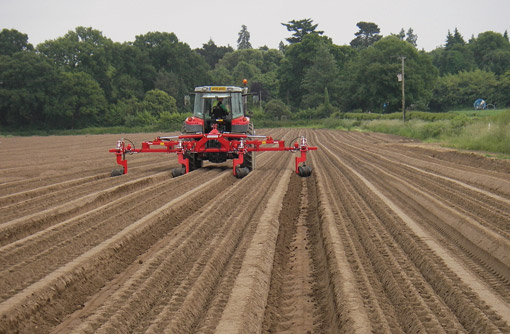 Mr Williams says it has worked well in his potato crops, improving yields and quality and replicating the results from DEFRA trials in a commercial situation.

“It has taken away wet spots and ponding that we sometimes had, so the crop isn’t sat in water, and it has allowed travelling in most conditions for fieldwork,” he adds.

“Our water is being used more efficiently, the fields are better able to cope with extreme events and we are preventing soil, nutrient and pesticide losses.

“With potatoes and vegetables being such valuable crops, we need to protect their future on the farm by managing these risks on a field-to-field basis,” says Mr Williams.

The farm has a two-row Wheel Track Roller on a tool bar, but a three-row machine will be arriving shortly to extend its use to carrot and onion crops.

The farm is also using it on cereal tramlines, but the practicalities aren’t as straightforward as in crops such as potatoes grown in raised beds. Mr Williams sees the machine being used after all autumn fieldwork has been completed to reduce tramline run-off over the winter months.

“It wouldn’t be possible to drag the machine around after each sprayer pass, but it will certainly help over the wettest months of year when the gate is shut,” he says.

Home Farm is the only commercial farm in possession of a working Wheel Track Roller and patent holder Mr Creyke believes the future will depend upon how it can be integrated with other machinery.

He believes there could be variations, but the principle is effective and has huge potential not just in the UK, but worldwide.

“We need to combine it with machinery such as planters and drills, so it would be great to have some manufacturers on board,” says Mr Creyke.