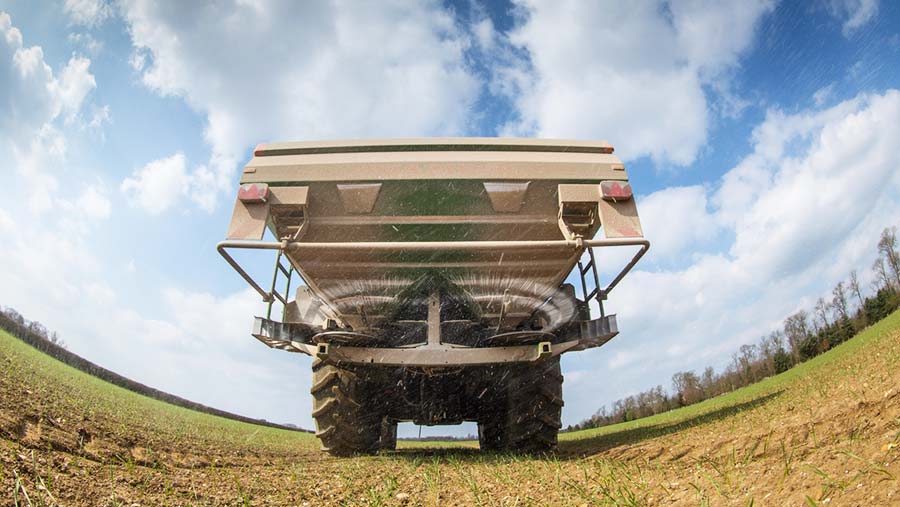 A Hereford grower has invested five years and over £40,000 on a variable rate farming project. He now assesses whether the investment has paid off or whether he should find alternative ways of achieving the same results.

Mark Wood, farm manager at JPF Clay farms at Fawley, near Hereford was initially reluctant to go down the precision farming route.

Mr Wood, an AHDB monitor farmer, suspected that variation in both yields and soils was having an effect on the farm’s performance, so decided to take the plunge.

His aim was to gain the ability to variably apply base fertiliser and adjust seed rates according to soil type across 565ha of combinable crops.

His original aim was better targeting of inputs and establishing more even crops, regardless of soil type and depth. However, he took a longer view and decided it was in the farm’s interest to improve soils, raising organic matter contents and soil indices.

For these reasons, he opted to go for base fertilisers and seed. Variable rate nitrogen was dismissed at the time, and although he has experimented with it since, Mr Wood remains unconvinced.

To begin with, the whole farm was scanned and soil sampled, so that soil zones and treatment maps could be produced. He opted for grid sampling, believing it to be the most sensible method of getting a representative sample, as well as being able to replicate it when the time came for repeat sampling.

“We have a whole range of soil types, with a base soil of sandy loam, and then patches of clay cap, marl and light sand, often in the same field. There is also tremendous variation in soil depth.”

Variable rate P and K fertiliser, plus lime, has been applied ever since. “We will be re-testing our soils this spring, which will show us whether we have managed to lift all our indices to 2 and soil pH to 6.5-7.

“Given this original aim, we have used a little more fertiliser than before. That’s fine, as the intention was to make improvements to our soils, not savings.”

Another observation is that the variations in soil, as identified by the zones, have matched up with the farm team’s knowledge of how they cultivate and work.

The success of variable seed rates is more difficult to pin down and assess, although total seed use has fallen, he admits. “I set out to even up our crops and we have seen more consistent plant counts going into the spring, so that seems to be happening.”

Like other farms, yields were very good in 2015. “But the terrible year in 2012 had a knock-on effect on 2013 results, so it’s difficult to attribute any yield increase over the five years to variable seed rates.”

However, the investment made in guidance and steering has been recouped, believes Mr Wood. “We thought we were doing a good job before, but our tramlines were 22.5m rather than the 24m that we were aiming for.

“Now we have tramlines of 23.75-24m. It means we are running at one tramline less per field in some cases, which is a good saving in time and fuel.”

Note: All costs incurred over five years. An additional £5-6,000 is required when each machine is changed

Hidden costs: What about management time?

Mark Wood readily admits that the total investment figure of £40,815 does not include his management time, which has been considerable, especially when it comes to getting the various different components required to work in harmony.

“That side of precision farming is disappointing and frustrating,” he says. “No matter what the different manufacturers tell you, it can be very difficult to get everything talking to each other and working well.”

As a result, he has put in a great deal of time and effort, none of which has been costed. There has also had to be input and commitment from the farm office, as well as his farm staff.

He gives one example of this – getting his Horsch drill to link with Greenstar. “It took a great deal of fiddling and nagging to get it sorted. That’s unacceptable, given our workload and the time pressures at drilling.”

He does, however, acknowledge that manufacturer support is better now than when he started out on his precision farming journey. “There have been improvements in customer service and a recognition from manufacturers that support is needed.

“But still problems continue. And they usually occur when we are at our busiest.”

Variable rate farming has been helpful and will be continued, although other methods and suppliers will be considered, summarises Mark Wood.

“The resulting maps have shown us that we have a problem with our headlands, which is something that needs addressing,” he notes.

They have also prompted him to question why he is continuing to farm the poorly performing areas, especially given current grain prices. “Perhaps they should be put into EFAs, or handed over to the shoot. We’re spending almost the same amount on them as the better areas.”

Another challenge is the huge amount of data that is produced, he comments. “I’m not sure that we’re using it effectively or if it is in the right format for us to do so.”

Savings of up to £15/ha can be achieved on fields that are treated variably, according to AHDB-funded research into precision farming.

That saving comes from either increased yields or reduced fertiliser costs, or a combination of both, explains independent consultant Ian Beecher-Jones.

Taking variable seed rates in isolation, savings are likely to be less, and more in the region of £3/ha, he reveals.

“Managing fields in zones works very well on some farms. Deciding what will be best for your farm situation is the right place to start – it’s all too easy to get too much information.”