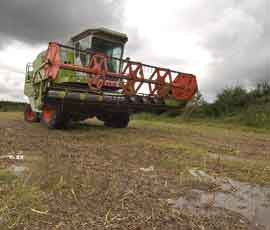 Harvest 2012 is almost at a close, and will go on record as one of the latest harvests in recent years, with most farmers finishing two weeks later than normal.

According to the latest HGCA / ADAS report, farmers in Scotland still had about 12,000ha of wheat to harvest by the middle of last week, with unsettled weather making it difficult to gather the final fields of crops.

Winter wheat yields were expected to average 6.8t/ha – 1t/ha below the five-year average.

“Yields were badly affected by disease and low sunshine during grain fill,” said the report.

“Most quality measures were fine, but cereal specific weights were much lower than normal and frequently below minimum market specification.”

Spring barley yields were also below average, at about 5.2t/ha, although Scottish farmers still had a few fields left to harvest, said the report.

“There was some variability in the spring barley yields ranging from 2.5 t/ha in the latest drilled crops, on land with poor soil texture, to 8.2 t/ha on some of the earlier drilled crops on free draining soils.

“Lower yields can be attributed to some poor growth in the cold and wet April period and some very late drilling of a small proportion of the crop.”

Bushel weights and nitrogen contents were lower than normal, with high screenings in some samples.

Oats were also suffering from low specific weights, with yields matching the five-year average at 5.6t/ha, albeit with some crops still left to harvest in Scotland, it added.