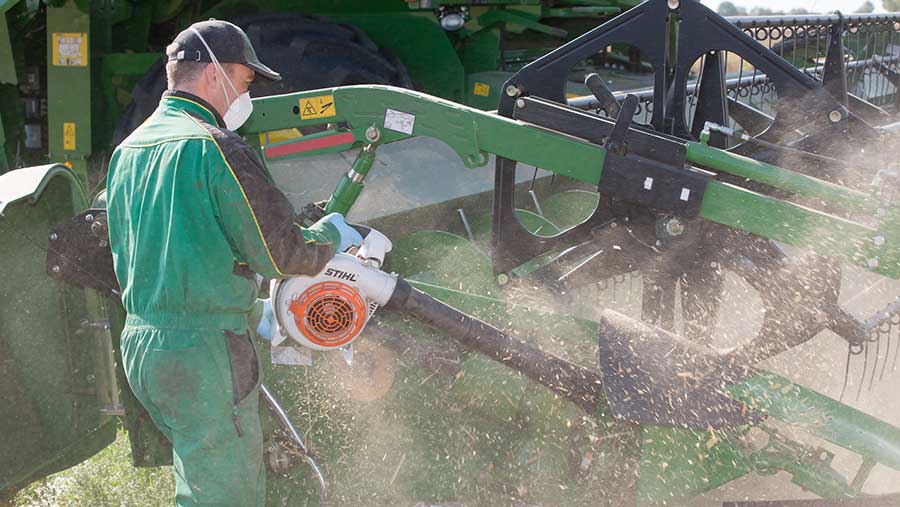 Managing the spread of blackgrass and other weed seed at harvest can be challenging for growers under huge time pressure, but it pays to keep machines clean where possible to avoid weed epidemics.

A season’s work managing cultivations and spending big on herbicides can be undone in a day if a machine moves from a field with high weed pressure to a cleaner area without cleaning weed seed from areas where dust and dirt settle.

With a host of machinery in fields at this time of year, even a small number of plants can create big trouble, with each blackgrass plant producing up to 4,000 seeds which can settle on combines, balers, tractors and trailers, before dropping off on uncontaminated ground.

Crops can be robbed of up to 13% yield with as little as five blackgrass plants/sq m, which is why BASF campaign manager Ruth Stanley says kit hygiene has a “vital” part to play in the war on weeds.

Kit hygiene is not just good practice, it’s vital to prevent the spread of the invasive blight that is resistant blackgrass Ruth Stanley, BASF

She says failures in this area have contributed to driving the grassweed further north and west from its home counties heartland as far as the north-east of Scotland.

“Products do not control weeds on their own anymore,” she explains. “Kit hygiene is not just good practice, it’s vital to prevent the spread of the invasive blight that is resistant blackgrass.”

Leicestershire contract farmer Eric Wright is keenly aware the finger of blame for the spread of weeds is often levelled at contractors, especially at this time of year.

“The biggest issue is often moving from one farm to the next,” he says, explaining the difference in disease pressure between farms is often greater than within blocks of land owned by the same person.

“There are times where we have to say we will do the best that we can in the time we’ve got,” Mr Wright says, but he has a clear strategy for his staff to follow, including combining clean areas in a field first before the dirty areas, and then cleaning down before moving on. 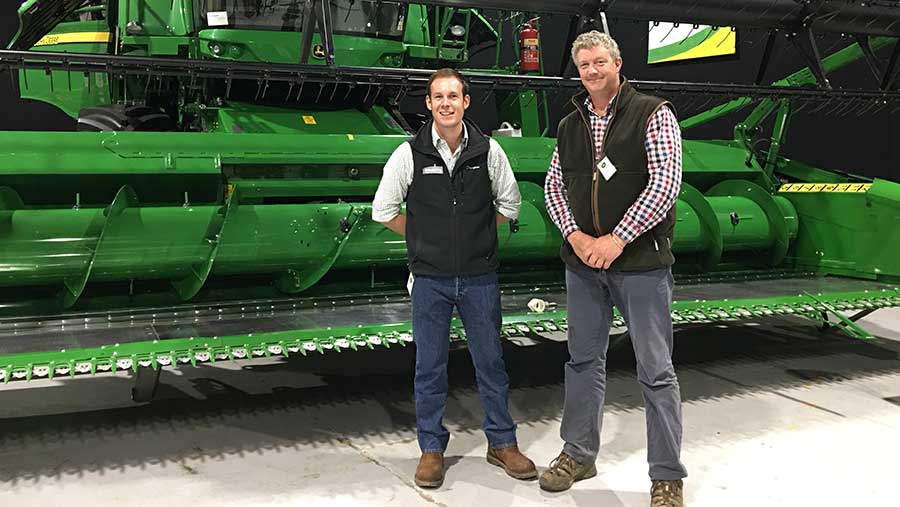 Extra kit on his outfits include disposable spray suits on all machines to help keep operators free of dirt, and a weed blower in the twine box for quick cleaning on baling outfits

He also recommends avoiding straw-for-muck deals unless you can be absolutely certain of the weed status of the farm where the muck is coming from.

Not a zero-sum game

Farm manager David Sedgely, who oversees 900ha of cropping at Silverwood Farms in the county of Rutland agrees with Mr Wright that it’s not always possible to do a perfect job as harvest is stressful.

He pointed out it wasn’t always possible to leave the dirty bits of the field until last because weed-infested parts need to be harvested in the hottest part of the day, as they often have a higher moisture content.

He recommends making the biggest effort to clean the combine thoroughly between different crop types, particularly before oilseed rape as blackgrass is most difficult to control in that crop, because the earlier establishment date leaves less time for stale seed-beds.

All of the speakers were at a roundtable event organised by BASF to launch its #keepitclean campaign to remind farmers, contractors and agronomists about kit hygiene.

They are also conducting an online nationwide weed survey. Growers who participate will be entered into a draw to win a knapsack sprayer.