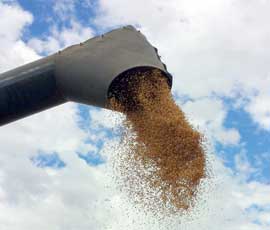 Farmers cut 695,000ha of combinable crops in the week to Tuesday (27 August), bringing the total harvest progress to 45% complete.

With 40% of the winter wheat now cut, yields were estimated at 7.6-7.7t/ha – close to the five-year average, said a report by HGCA.

However, yields in all crops were varying widely, depending on conditions over the winter. Wheat quality remained good, with 76kg/hl, over 300 Hagberg and 12.8% average protein.

Spring barley yields were better than normal, at 5.5-5.8t/ha, with 30% of the area now cut, it added. Quality was excellent, with low screenings, bold grains, and nitrogen at 1.7%.

Farmers had also had to dry very little grain, with most crops coming in at an average of 16% moisture.

Winter oat harvest was now 45% complete, and yields were slightly above average, at 5.6-5.8t/ha. “Specific weights are low in the East, but better in the West, ranging from 43-58kg/hl,” said the report.

“Harvest of winter oats is nearing completion in the South and East, with spring oat harvest just getting started.”

“The more backward crops in the Scottish Borders only received a desiccant this week, so these crops are 10-14 days away from harvesting,” said the report.

“Green seeds have been reported in some samples, with end users asking for green seed tests to be carried out before they allow unloading to occur.

“Admixture (small weed seeds and volunteer cereals) is also a problem this year, with 10-13% admixture common and some of the weediest crops yet to be harvested.”