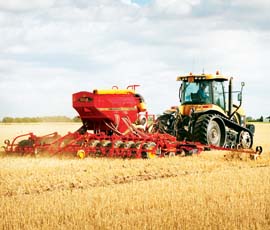 Showers have stopped some combines in their tracks today (11 September), allowing many people to make a start on drilling oilseed rape.

In Derbyshire, James Chamberlain finished most of his harvest at Glebe Farm, Shardlow, last week, but still had three parcels of land that were too wet to cut.

“It’s been really challenging,” he said. “There are just two bits of barley and one of wheat that we can’t get at with the combine – it just keeps sinking.

“It’s not a huge area, but it’s several hundreds of pounds worth of crop which we can’t get.”

“It’s been a mixed bag – we’d set our sights on a fairly ordinary, wet harvest,” he said.

“But we didn’t have as much rain in August as I’d anticipated, and yields were better than expected, given the weather conditions.”

However, in Tyne & Wear, Geoff Alderslade was unimpressed with yields at West Fellgate Farm, Wardley.

“The first couple of loads went for milling but then we have some very heavy rain and after that it was all substandard.”

Harvest was almost over and done with in County Down, Northern Ireland, after a week of frenetic activity.

“This time last Saturday nothing had been cut, but another few days and we will see it finished,” said Charles Davidson at North Down Grain.

“We had a tremendous week last week, and farmers got almost everything cut and baled in a week – crops were coming in at 16-18% moisture by the end of the week as they were really very ripe.”

In Somerset, Richard Payne was busy drilling rapeseed behind the subsoiler at Manor Farm, Heathfield, having finished combining on Friday (7 September).

“I’m about halfway through the oilseed rape, and it’s slow going behind the subsoiler,” he said. “But the soil is in such poor condition that we’ve got to lift a bit of the surface compaction.

“It’s hard to tell whether to rush ahead with the drilling, as we’re probably now going to have the longest driest autumn ever.”