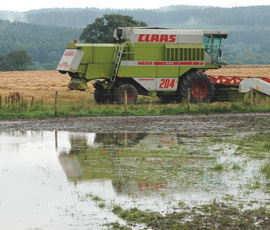 Harvest pace has slowed again, with heavy showers frustrating farmers’ attempts to cut the last of this season’s crops.

In Yorkshire, contractor Keith Snowball was waiting for a break in the weather before resuming harvest at clients’ farms near Brandsby.

“We’ve finished harvest bar 11ha of oats and 26ha of spring beans. We tried the beans on Tuesday but they were 30% moisture, so we left them again.”

Continued showers meant there hadn’t been a decent combining day for about 10 days, said Mr Snowball. “There are still some sizeable lumps of wheat left to cut in the area.

Andrew Darling had had plenty of problems with poor crops and breakdowns at Farmway’s central grainstore near Durham.

“We’ve had difficulty in getting parts, some of which have had to be brought in from Europe,” he said. “Wheat crops haven’t been disastrous but some of them haven’t been far off.”

North of the border, Jim Cargill was likely to have lost £700,000 in income this year at Coldstream Farm, Fettercairn, Aberdeenshire, with every crop yielding below average.

“We have finished harvest, but that’s about the only good thing you can say about it,” he said. “It really hasn’t been good.”

Nationally, wheat bushel weights were the lowest on record, at an average of 70.7kg/hl, according to provisional results from the HGCA.

With a typical range from 62kg to 79kg – but also including some in the 50-60kg bracket, specific weights were the lowest since records began in 1977, said the report.

Low bushel weights had not been Duncan Whiteman’s biggest problem at Arlescott Farm, Telford, Shropshire; it was the lack of full grain bins.

“Our garvest is all over, thank goodness, and I think it’s best forgotten,” he said. “Our wheat was a good 2.5t/ha lower than normal – but at close to 7.4t/ha it’s better than some areas.

“It’s probably cost us £60,000 – in May it was looking like it could be the best harvest we’ve ever had, but I think it’s turned out to be the worst.”