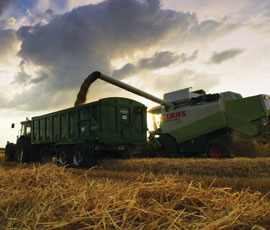 Harvest may be a distant memory for many farmers, but there are still plenty of crops to cut in Scotland and other parts of the country.

In Morayshire, Hamish Forbes still had a third of his harvest to gather at Lockdhu Farm, Nairn, with wet conditions making for slow progress.

“We were combining yesterday (1 October) for the first time in 10 days – it’s getting really quite serious,” he said.

“Things haven’t been good at all; weather-wise we’ve been completely stuck.”

“We’ve got friends all over the country and we were the second to finish combining, on 11 September – we seem to be miles ahead of everyone else,” he said.

However, other farmers in the area had not been as fortunate, with quite a bit still to combine in the borders, he added.

In Shropshire, harvest was just about finished, although farmers still had the odd fields of spring oats and rapeseed to cut, said David Roberts at Westbury-based merchant G.O. Davies.

“Wheat quality is very variable, and the whole job is sensationally difficult,” he added.

“We’ve got wheat that’s anything from 50kg/hl upwards, and it’s incredibly variable even within a pile – I’ve never known anything like it.”

Harvest was also nearly finished in the West Country, with just the odd field of beans left to combine.

“In general, peas and beans have done quite well, although there have been one or two horror stories,” said Ian Eastwood, marketing director at West Country Grain.

Spring barley had also performed reasonably well, although yields were slightly down, he added.

Pulse yields had all come in below average, according to preliminary trial results from PGRO.