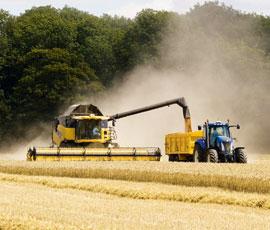 Combines are managing to continue to cut oilseed rape and winter barley between the showers, with very variable results.

Rain overnight delayed harvest at Heathcote Farm, Toddington, Bedfordshire, but Andrew Robinson was back on again this afternoon (3 August).

“We had 16mm overnight, and we’ve just got going again – I’m very thankful we’ve got tracks on the combine,” he said.

In Wiltshire, Martin Smart had got four combines out dodging the showers at P & J Awdry and Son’s Ashton Farms, Trowbridge.

“I’m spraying off rapeseed in the middle of Salisbury Plain, while the combines are out fighting annoying showers all over the place,” he said.

One farm had 42mm of rain last night, while another was able to cut rapeseed at 15% moisture today, with yet another cutting at 10% moisture.

“It is just changing all the time. We’re just going to have to keep chipping away at it.”

Oilseed rape harvest was well underway across Europe, with the best reports coming from France, where 80% of the crop had been cut, said Gleadell’s Willie Wright.

“The French have raised their rapeseed crop estimates to 5.4m tonnes. There are also good reports coming from Germany (5m tonnes) but, unfortunately, not the UK.

“Rapeseed is competitively priced compared to other oilseeds, and will benefit from renewed demand at these levels.”

However, human consumption bean crops had suffered badly from lack of pollination and pod-set in northern England, and yields were likely to be poor.

Further south there were some very good spring crops with lower Bruchid levels than in recent years, which would help boost quality, said a report by the British Edible Pulses Organisation.

Send us your harvest photos for our Harvest Highlights gallery.

For all harvest news go to our Harvest Highlights 2012 page.