Wheat yields continue to disappoint in the closing stages of this year’s harvest, with poor weather frustrating progress in Scotland and northern England.

Highland Grain’s Simon Barry is hopeful of that “by the end of this week, we should have 70% of our barley in.”

About 90% of the spring malting barley is Concerto, and so far the specific weight is averaging 62kg/hl with a nitrogen level of 1.43%, screening retention of 95% and a moderate skinning percentage of 3.5%.

Like the rest of the UK, oilseed rape has been a disappointment, but this was due to many growers suffering large yield losses due to very strong winds during ripening. 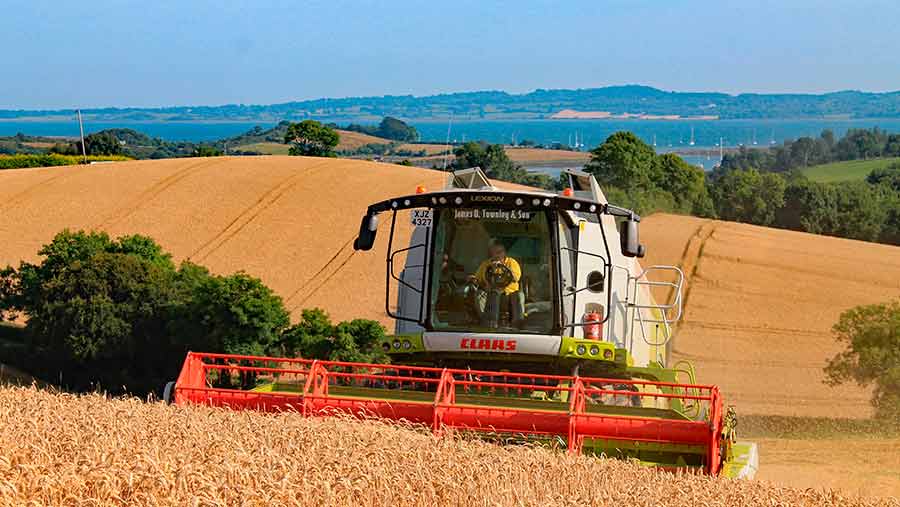 “Combines haven’t moved since Friday in this part of the world.”

With the majority of the store’s grain now in, wheat and oats are the only crops meeting expectations.

On the other side of the country in Shropshire, wheat quality has been pleasing, says Grainlink’s Stuart Dolphin.

“The wheat has been very good with most of the milling wheat making the spec.”

Specific weights have averaged 78kg/hl and protein levels are exceeding 13%, he says.

“In terms of quality Crusoe has been the most consistent variety with the protein in some samples over 14%.”

Winter barley has been disappointing with specific weights ranging from 52kg/hl to 62kg/hl.

But the spring barley is more positive with average specific weights of 64kg/hl and the majority of the crops meeting the malting specification, despite a small proportion suffering from grain skinning.

Oilseed rape has had very small seeds but a satisfactory oil content of 43% – although some samples have been below 40%.

“The rape that was sown later has provided the best yields,” says Mr Dolphin.

Oat quality has so far been varied with some specific weights about 45kg/hl and others reaching 54kg/hl.

Disappointment also sums up harvest at the other end of the country for Jon Bond at Trerule Farm, Saltash, Cornwall.

“We’ve got our harvest done, but it was nothing to write home about,” he says. Some earlier drilled wheat provided his best result, yielding 8.9t/ha, with his average sitting at 8t/ha and a specific weight of 77kg/hl.

“With this year’s low prices I’m really not looking forward to selling it.”

Finally in the East, winter wheat samples have all been excellent, says Robert Munro at Fengrain.

Despite yields being slightly lower than expected milling quality is up, with specific weights averaging 76kg/hl and protein at 13.2%.

Winter barley has been a disappointment with specific weights struggling to reach 60kg/hl.

But spring barley is better, matching five-year average for both yield and nitrogen levels, and providing a satisfactory specific weight of 64kg/hl.

And although beans are just beginning to come in, many are not making the human consumption specification.