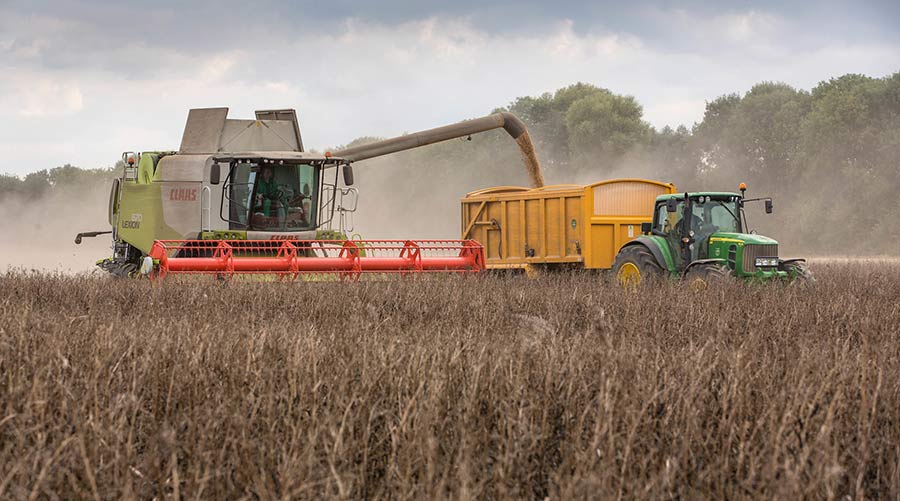 Harvest is rounding off in Scotland, with some farmers bagging high yields and good quality, while others have struggled with wet weather and nitrogen content.

Harvest is nearing completion for Sandie Norrie at Caverton Mill, Kelso, with all crops proving a great success this year.

His 1,174ha of winter barley yielded 9.5t/ha, which he is delighted about. His 283ha of oilseed rape averaged a very pleasing 4.6t/ha.

“We have just finished the spring barley, which really has done tremendously, averaging 8.3t/ha and peaking at 9.1t/ha is one field, which is unheard of for me.”

His first 324ha of winter wheat averaged 10.7t/ha and he is expecting to have the remaining 202ha cut by Sunday (15 September).

This year was the first time Mr Norrie has grown oats – which produced a pleasing 8.4t/ha – and he plans to up his hectarage in the coming year.

Quality has not been an issue,” he adds. “I had 55 loads of malting barley go without a rejection. However, some in this neck of the woods are struggling with skinning and screenings.

“It really has been a tremendous harvest – it’s just the prices that are frustrating.”

Harvest has been a start-stop affair for John Hutcheson at Leckerstone Farm, Dunfermline, with around 200mm of rain during August.

“It was slow and quite a bit of drying was needed, but yields are good and up on last year,” he says.

His winter barley yielded around 9.1t/ha, while the wheat averaged 9.4t/ha, the oilseed rape 3.7t/ha and the spring barley 5.7t/ha.

He has also grown spring oats, 22ha of which were sown last autumn and combined with the winter barley. “These performed well, yielding 7.4t/ha.

“We are now just finishing spring barley and have one more day left for the rest of the spring oats, then three to four days of beans,” he adds.

“I think generally we will look back at this harvest as a good one.”

James Muir at Arns Farm, Clackmannan, wrapped up harvest last Saturday (7 September) after a few disappointments with his crops.

His winter oats mostly went flat a month before they were cut, meaning they yielded 6.1t/ha instead of the 7.4-8.7t/ha the farm usually produces.

“I think I will drop the oats next year as they usually clash with making hay,” he says.

A field of his Motown winter wheat also went flat, however another stood well and the yield averaged 9.9t/ha, but he had to cut it at 25-26% moisture as it had started sprouting.

“The Sassy spring barley looked OK, but we are having a problem with the nitrogen,” he explains.

“It was all meant to go for malting, but its nitrogen content is around 1.64-1.92%, so more than half of it will likely go for feed now and early on it looked like a barn buster. But yields are up and there’s plenty of straw.”

At West Scryne Farm, Carnoustie, James Porter has finished combining, but harvest has been a mix. “Spring barley yields were very good,” he says. His Laureate crop average over 7.4t/ha, which he says was exceptional.

Winter wheat yields were fairly average, at around 9.9t/ha. Though his crop of Barrel made milling specification, he doesn’t think the Zulu will pass, as he had high levels of sprouting due to the wet weather several weeks ago.

“But it all stayed standing, which was good.”

Overall, it’s been a tricky year for him. “We had one or two good harvesting windows. The catchy weather has been the same for everyone, which has been frustrating at times. But we aren’t desperately late, so it’s not too bad.”