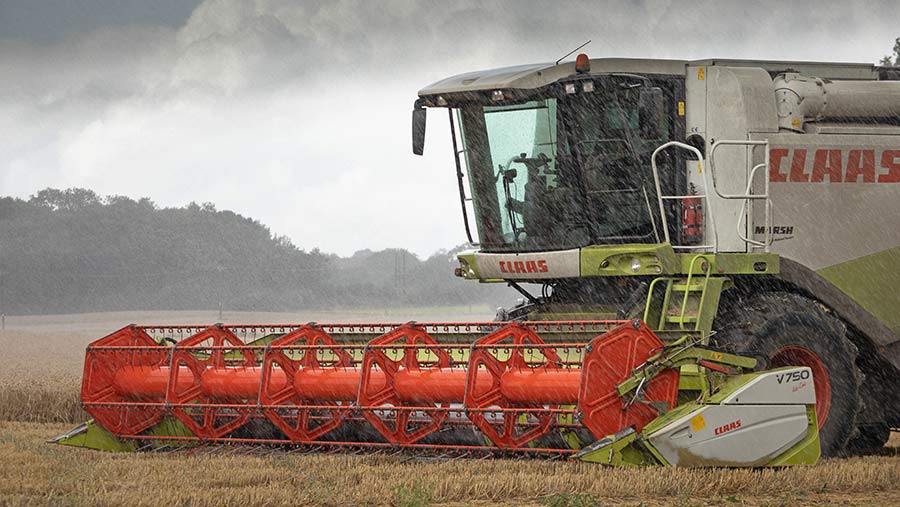 Wheat and spring barley crops are trickling into grain stores across the country, as farmers desperately dodge showers to preserve crop integrity.

Movement into Trinity Grain, Shrewton, has eased off as rain prevents farmers getting the combine out.

“Everything came in dry and had really low nitrogen.

“It’s all been really good quality and farmers are pleased with yields, especially of winter barley.”

However, now the weather has turned, crops are coming into store a lot wetter.

“Farmers are trying to get it off the field and are worrying about Hagbergs, but these are still coming in fine,” explained Mrs Lawrence.

“Wheat is coming in at 21-22% moisture, with some spring barley up that high too.”

Specific weights had been really high in most cases.

“Generally, they have been up, with barley around 68kg/hl and wheat in the 80s.”

“We are expecting a lot of grain to come in, as we have taken just over one-third of our 100,000t storage.

“Generally, farmers are pleased with yields and not as upset with oilseed rape as we thought they would be.”

Harvest also got off to a good start before the rain at Cefetra (Wessex), Somerset.

“Things were going tickety-boo and then the rain played its hand, which has affected intakes,” said farm grain manager Ian Eastwood.

Spring barley has started to come in at 17-18% moisture, while feed and milling wheats are about 16.5-18% moisture.

“Farmers, in general, are still optimistic, but the rain due on Wednesday [14 August] will slow things up again,” he added.

So far, the quality has been good.

“Of milling wheats, Skyfall, Crusoe and Zyatt have low proteins of 12-12.5% protein and of the feed varieties, Graham has had good bushel weights of 75-76kg/hl,” said Mr Eastwood.

“For some, there’s a long way to go with harvest.”

It’s a similar story further north, where the combine has ground to a halt due to rain showers at Sweethope Farm, North Kelso.

“The winter barley was done a week to 10 days ago, but it’s not all baled.

“There’s a lot of wet, soggy straw on the ground. Its yield wasn’t too bad at all – better than average – but not brilliant.”

Mr Fuller-Shapcott tried to start cutting his oilseed rape last Thursday [8 August] but some was at 30% moisture.

“It was the first field of rape, so I don’t know if it wasn’t quite fit or whether it was wet from the rain.”

The spring oats and winter wheat are just ready to be sprayed with glyphosate.

“The spring barley is looking good as well, we just need some sun.”

Oilseed rape has been the trickiest crop for growers this year, with yields varying from 1t/ha to 5t/ha, according to Owen Cligg at United Oilseeds.

“The average is more than 3t/ha, but that is lower than last year, and oils are generally about 1% less.”

Crops have been really mixed.

“We were hoping for better yields into Lincolnshire and the North, but what we are seeing is still variable,” said Mr Cligg.

“We are still waiting to see the full impacts of the weather in the North.

“Growers should be on the look-out for sprouting problems and free fatty acid issues.”