Recent rain is hampering progress, with many combines stood stil and soggy straw waiting to dry out, with more rain expected next week.

The Scottish harvest is also under way and winter barley yields are looking good for one grower. 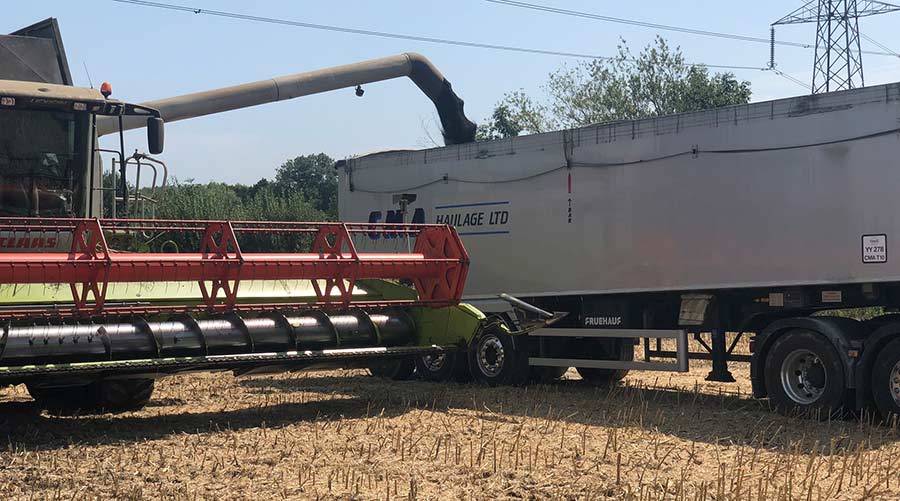 In Berkshire, winter barley yields have exceeded previous years for Colin Rayner, at Berkyn Manor Farm, Horton, where his Glacier averaged over 7.4t/ha.

No grain was dried, and it has now all been sold off the farm, said Mr Rayner.

Oilseed rape has also exceeded expectations. He grew both Barbados and Dariot, which yielded between 3-4t/ha, which he said was very good for his land.

The crop did not suffer with any flea beetle issues, following a spraying regime of eight applications in the autumn. “It was the first time we’ve grown oilseed rape in five years,” he said.

He grew Orwell, which came in with a specific weight at the top end of 60kg/hl, and produced plenty of straw.

Next to meet the combine will be oilseed rape, which looked a very good crop, but harvest has come to a standstill since the rainfall, he added.

He grew Pearl, which averaged 9.8t/ha. Despite having very little nitrogen applied it achieved specific weights in the high 60kg/hl.

The only challenge now is getting the straw dry enough to bale, said Mr Runciman.

Oilseed rape harvest is due to begin next week, and it looks to be a good crop, he added.

On the Isle of Sheppey, the start of winter wheat harvest has seen high yields of 11-12t/ha achieved – about on target for expectations, said Ryan McCormack, farm manager at Burden Bros, Old Rides Farm.

“On the Isle of Sheppey an average yield of 11t/ha is expected for winter wheat,” he added. Specific weights averaged 80-81kg/hl, and the Crusoe protein content had reached 15%.

Belmont and Bazooka winter barley also reached pleasing yields of 10.5t-11t/ha, with a specific weight of 68kg/hl and moisture of 13-14%.

His Bazooka crop averaged a specific weight of 66-67kg/hl and produced a lot of straw – and an added bonus was that no grain needed drying, thus saving on fuel costs.

However, his Campus and Alizze oilseed rape did not quite meet the expectation of 3.5t/ha and instead averaged 3t/ha. This was due to problems with flea beetle, he added.

Next to meet the combine this weekend will be the spring barley, followed by wheat.