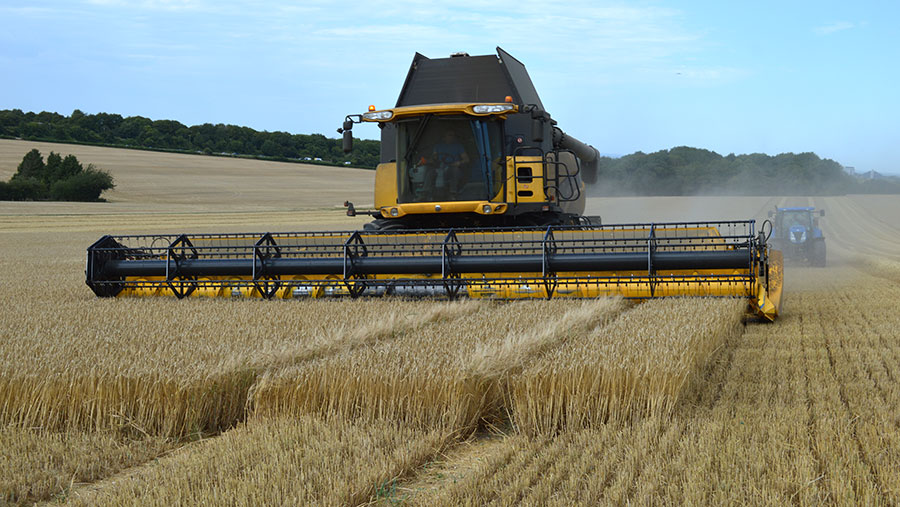 Hampshire grower Chris Allen is delighted with the early 7.5t/ha yield of his Laureate spring malting barley variety, with June rain saving the crop after a severe spring drought.

He has 200ha of the malting variety to cut, which he started last Friday, and it was being harvested at 11% moisture on some of his chalky soils, with the combine meter touching 8t/ha in places.

“I am very pleased with the early yield and it looks as if the rain in June save the crops,” he says..

Due to the wet winter, the crop was drilled slightly later than normal, in late March, and received a full fungicide and plant growth regulator programme.

The 35ft-header New Holland CR 9090 combine was cutting about 5ha/hour, and Mr Allen’s spring barley harvest could all be completed this week if the weather holds. No analysis has been carried out, although the crop was giving a good, bold grain sample.

This is his first year of growing Laureate, after switching from Concerto, and all his spring barley is malted at Robin Appel’s Warminster maltings and made into trendy Bimber vodka and gin in London.

The Concerto usually yielded 6.3-7.5t/ha and always dipped under the maltsters’ demand for a nitrogen content below 1.65%, but the market is now looking to the higher-yielding Laureate.

Mr Allen farms 1,200ha of largely arable land at Home Farm, Farleigh Wallop, just south of Basingstoke, half as tenants Fordham and Allen on Portsmouth Estates and the other half in a contract farming deal with the estate.

The wheat yields were all over the place, depending on drilling date and the type of soil, as his farm varies from heavy clay caps to easily worked chalk loams.

He was “pleasantly surprised” at his winter malting barley yields, given the spring drought, with 36ha of the variety Craft making 6.25t/ha and 103ha of specialist malting variety Maris Otter delivering just over 5t/ha. Nitrogen contents were a bit higher than usual at 1.6-1.85%, but all went for malting.

Oilseed rape was a disappointment, with Mr Allen harvesting 131ha as a “salvage job” in a crop badly hit by cabbage stem flea beetles.

He will not be growing oilseed rape again and will replace the area with more beans and forage maize. He is also introducing winter oats to the farm and putting more land in environmental schemes.