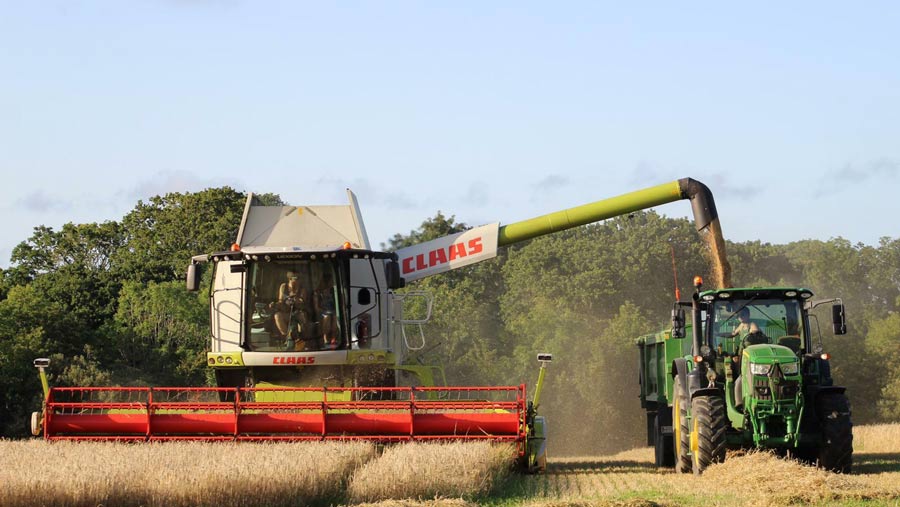 The mixed fortunes of harvest continues with many farmers seeing grain and straw yields well below their farm average, while at the other extreme, one Cornish farm has recorded its highest ever oilseed rape yield. 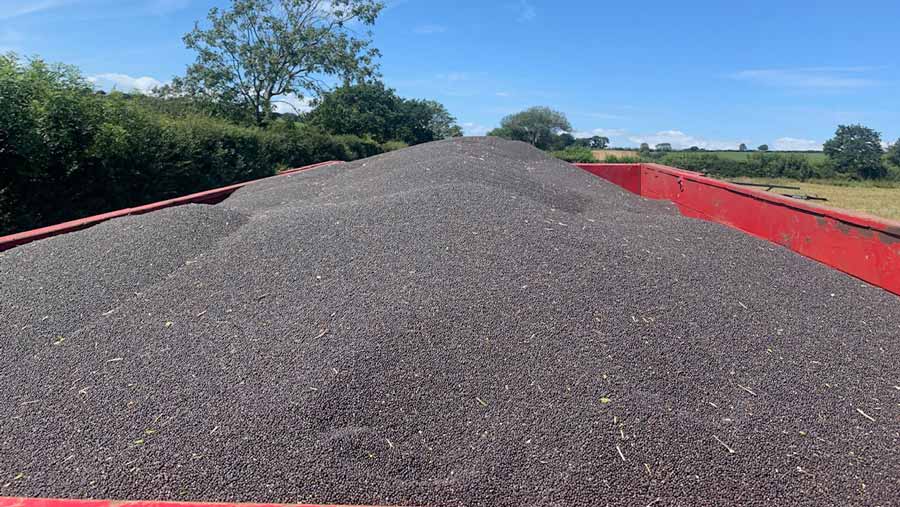 In Cornwall, Ashley Jones has been delighted with an oilseed rape yield of 4.07t/ha with Ambassador – the highest recorded on Smeaton Farm, Saltash. The 18ha comprised Ambassador and Aspire – the latter yielded 3.58t/ha.

“We haven’t grown oilseed rape for seven years and things have changed in the way we establish our crops – we have moved to min-till, which has probably attributed to the success this year. I’m very pleased,” says Mr Jones.

He has made a start on 28ha of Skyscraper and Sundance winter wheat, which has yielded 8.4t/ha so far with specific weights at 78kg/hl.

“The winter wheat average isn’t too far adrift from the farm average, but winter barley and winter oats have been affected badly by the dry weather,” he says.

The 20ha of California winter barley averaged 6.67t/ha, which is 2t/ha below the farm average, and the sample was also disappointing.

“The barley was pinched because it gave up in May when it was so hot.”

And it is a similar picture with the 8ha of Mascani winter oats, which yielded 5.68t/ha – 1t/ha below the farm average.

“The quality of the oats, wheat and oilseed rape seem good, the straw however, is poor – with yields down by half.”

He hopes to move on to 24ha of spring barley next, which is looking promising.

Further north, Meurig Raymond has nearly finished 140ha of conventional and hybrid oilseed rape at Trenewydd Fawr, Haverfordwest – and he has been pleasantly surprised.

“We had cabbage stem flea beetle damage along with the wet winter and the drought, but so far we’re achieving 4.2t/ha.”

But it is a different story with the 70ha of winter barley. The yield was down by 1.5t/ha to average 7t/ha because of the wet winter and the drought, says Mr Raymond. However, the quality was good, with specific weights of 67kg/hl.

He hopes to move into the 240ha of Graham and Skyfall winter wheat next, and expects significant drought damage. Following this will be 400ha of Laureate spring barley, which has produced some secondary tillers, and for which he has no great expectations on yield.

Over to the east of the country, Andrew Kerr has finished combining 60ha of Alabaster, Gravity and Kerrin winter wheat at New House Farm, North Weald, with an  average yield of 8.5t/ha. That was15% below the farm average of 9-10t/ha, although it had respectable specific weights of 80kg/hl and came off at 12-18% moisture.

The oilseed rape crop was a failure, says Mr Kerr. “We just combined it to clean up the field – that’s flea beetle for you.”

He will be moving on to 26ha of Mulika spring wheat next, which really struggled in the drought – so he’s expecting a yield of just 5t/ha.

“I couldn’t get fertiliser on to it as it was too dry, it’s not as thick or as bountiful-looking as I hoped.”

“The Orwell, Funky and Sunningdale winter barley was very poor, it yielded 5.3t/ha over 250ha, which seems to be comparable with the local area,” he says.

Last year was exceptionally good at nearly 10t/ha, but the weather just didn’t suit winter barley this year, he adds. But quality was fine, with specific weights of 60kg/hl.

Mr Parsons is planning to make a start on the 270ha of Nikita and Chrome oilseed rape next week (10-17 August). “We had some failed crop that we took out early in the spring, but what’s left looks all right.

“The Revelation, Barrel and Skyscraper wheat will follow closely behind – it looks much more promising in the field, so I’m hoping it won’t disappoint.”