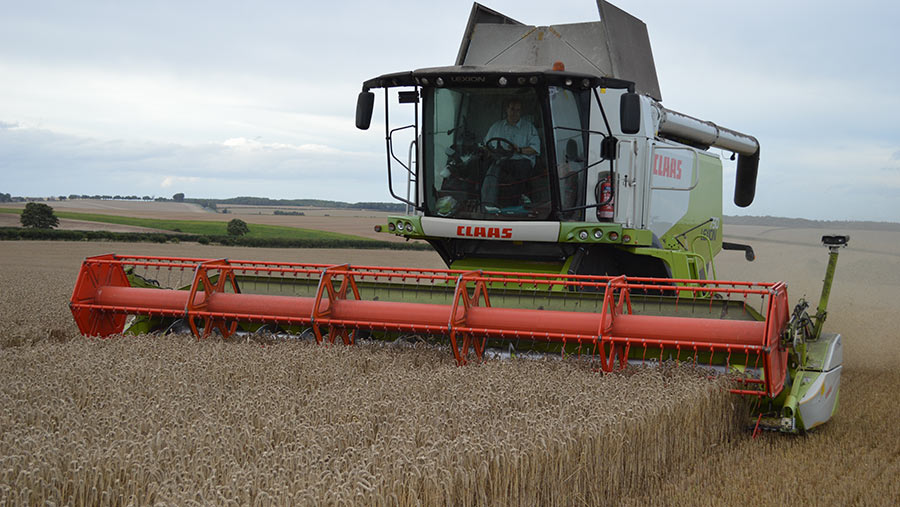 Tim Lamyman has just cut a bumper 15t/ha-plus wheat crop by encouraging rooting and keeping his crop green for as long as possible, which helped counter a wet winter and spring drought.

High on the Lincolnshire Wolds, he harvested a crop of 15.38t/ha after the crop stayed green until the start of August, while many other wheat growers have seen the lowest yields for a generation.

Foliar feeds rich in potassium helped his crop root well in the very wet autumn, and a combination of micronutrients and fungicides helped it cope in a bone-dry spring.

“Creating a good root structure and keeping the crop green through July helped result in this high-yielding crop,” he tells Farmers Weekly.

The very even crop had four to five green leaves up to the start of August, helping to maximise the time for photosynthesis, before the crop suddenly turned towards senescence through August.

Mr Lamyman cut an 8ha block of wheat on Friday under leaden skies which threatened showers at an average of 16.5-17% moisture. He finished harvesting the crop with his 25ft header Claas Lexion 750 at 10pm in the evening, showing a 15.38t/ha yield when corrected to 15% moisture.

“It’s the boldest grain sample I have ever seen, looking as round as ball bearings,” he says, The crop gave a specific weight of 76-77kg/hl which is set to rise when dried to 15% moisture. 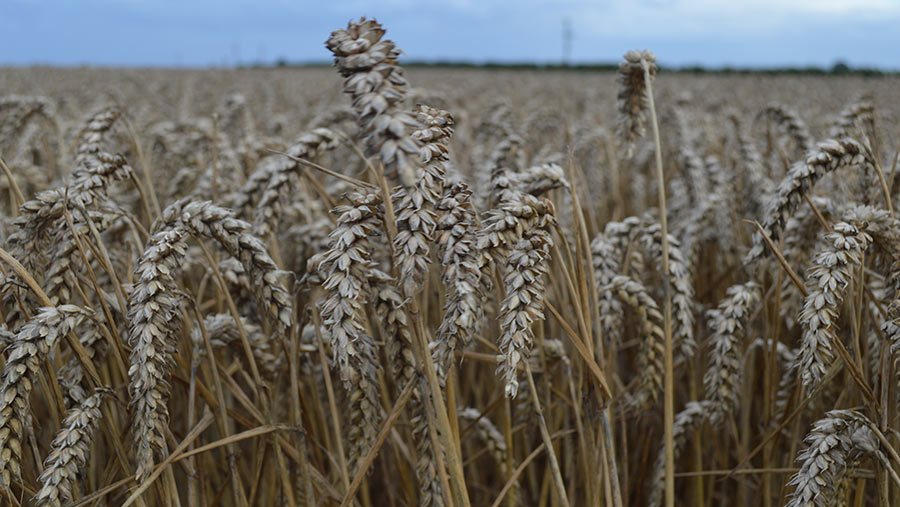 The harvested crop was checked over a local weighbridge, and the yield was monitored by machinery consultant Bill Basford as an independent adjudicator.

Mr Lamyman has been using foliar feeds and micronutrients over a number of years to take the stress out of plants and produce record-breaking yields, even in difficult growing years.

He broke the world wheat yield record in 2015 with a yield of 16.5t/ha, before being topped by Rod Smith in Northumberland at 16.52t/ha in the same year. Eric Watson in New Zealand is the current record holder with a yield of 17.398t/ha, cut in February this year.

This season, Mr Lamyman chose a new very high yielding soft feed variety Colosseum from breeders KWS, which comes up for possible inclusion in the AHDB Recommended List later this year. It has an upright early growing habit which he prefers as the plants intercept sunlight better.

The variety is stiff-strawed as he favours low plant growth regulator use and tries to keep crop stress to a minimum. The variety has good resistance to septoria disease, but has only moderate resistance to brown rust which can be a problem on the Wolds.

Destined for seed, the crop was drilled on 23 September 2019, at an average rate of 175kg/ha into chalky loam soil on an exposed hilltop field, on Mr Lamyman’s largely arable 600ha farm at Worlaby, just south of Louth.

Even on his free-draining chalky Wold land, Mr Lamyman had to try out 11 different establishment techniques across the farm in order to get all his winter wheat in the ground in an extremely wet autumn.

He ended up drilling 238ha of winter wheat – a record area for the farm despite the weather – largely at the expense of spring barley, which was cut from 140ha to 44ha. This was because he anticipated a big barley crop nationally weighing on prices, and had concerns about the malting barley market due to the effects of Brexit.

The wheat crop was given three autumn spray treatments of Delta, a potassium-enhanced nitrogen fertiliser, from the company Bionature, which supplied all the foliar feeds and micronutrients for the crop. This was aimed at encouraging rooting.

“I have never seen a variety come out of the winter as clean and as good as the Colosseum,” says Mr Lamyman.

Despite the very wet winter, the root structure was just as good as in the previous drier winter, with the wheat roots going down as deep as 30cm by the end of February.

Foliar feed TipTop, which supplies macro and micronutrients, was applied in the spring with Mr Lamyman again stressing the importance of feeding the crop on his potassium-hungry light soils.

Two further micronutrient treatments were used later to improve ear fertility in the late spring, namely the calcium-rich Calflux at the T2 flag leaf stage, and Xstress – which provides a range of micronutrients – at the T3 head spray timing.

He believes that ear fertility is key in achieving high yields, and is looking to produce 4-5 grains/floret and 50 grains/wheat ear.

“We are looking to take the stress out of the plants, especially in the very dry spring,” he adds.

The foliar feed programme was supplemented by a full fungicide programme to extend the greening period of the crop, and the new azole-SDHI combination of mefentrifluconazole plus fluxapyroxad (Revystar) was used at the T1 stage.

A similar approach was taken at the T2 flag leaf stage using the same azole and SDHI mix, plus the strobilurin pyraclostrobin to boost brown rust control and give an additional greening effect.

A T3 azole-based head spray was used, and then a later T4 spray of the azole tebuconazole to keep any late brown rust out of the crop.

Spring nitrogen fertiliser was increased up to a massive 360kg/ha for the crop, with the aim of a yield of 15t/ha in mind and feeding ear numbers of 550-700/sq m.

The extra nitrogen, over more conventional levels, and the programme of foliar feeds and micronutrients cost about £250/ha, so he was looking for roughly an extra 2t/ha of wheat to cover the additional costs.

This season, his lowest wheat yield – not using extra nitrogen and foliar feeds – was 8t/ha. The new variety Theodore did 10.5t/ha, and two blocks of Parkin made 11.5t/ha and 15t/ha. His main varieties of Zyatt and Marston are largely still to cut

Mr Lamyman recorded his best-over oilseed rape yield on his farm of 7.04t/ha this summer with the conventional variety Acacia, and just shy of the world yield record of 7.19t/ha.

This crop, like his wheat, had a programme of foliar feeds and micronutrients to help rooting and assist with pod survival and maximise seed size.