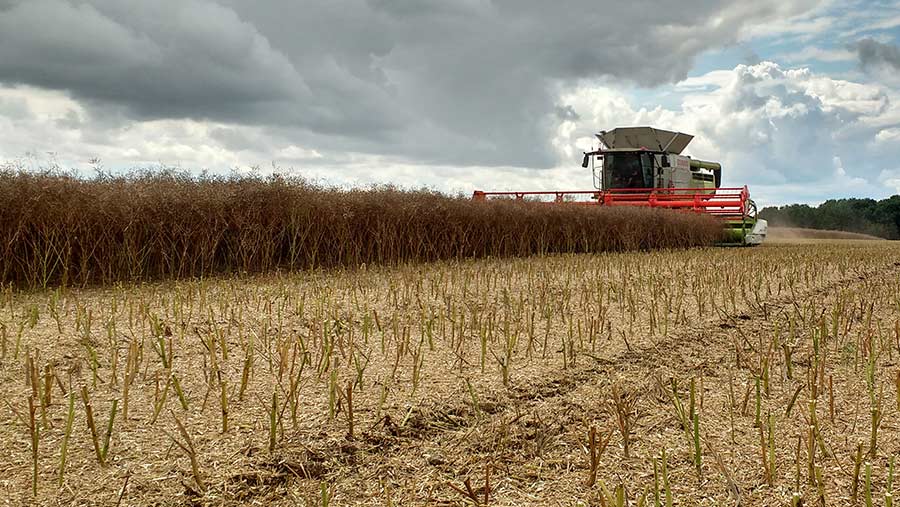 He managed to fight off pest problems and survive a dry spring to record his best-over OSR yield on his farm of 7.04t/ha –  just shy of the world yield record of 7.19t/ha.

This high-yielding crop was grown on a field which had not seen OSR for 20 years. A combination of autumn foliar feeds and pyrethroids helped the crop escape severe cabbage stem flea beetle damage.

“The key was the long break from oilseed rape and then getting the rapeseed established well before the flea beetles arrived in the crop,” he tells Farmers Weekly.

The crop had two application of a pyrethroid insecticide in the autumn and two sprays of the foliar feed Delta, which includes potassium for improved rooting, on Mr Lamyman’s largely arable 600ha farm at Worlaby, just south of Louth.

Mr Lamyman believes the combination of the insecticides to combat the invasion of flea beetles and the fertiliser to promote rooting helped alleviate stress in the crop during autumn.

The variety was the Limagrain-bred conventional variety Acacia, which is the highest-yielding variety on the current AHDB Recommended List. It gave some very thick stems of up to 50mm and a plethora of pods and seed when the crop was harvested on 29 July.

The crop had a full fungicide and plant growth regulator programme in the spring, along with an extra pyrethroid, and further foliar feeds of Xstress and Calflux at early flowering to help pod survival and maximise seed size.

This high-yielding crop comes at a time when the area of OSR has fallen dramatically over the past few years due to flea beetle damage and establishment problems, and this year’s UK harvest could fall below 1m tonnes from 2019’s 1.75m tonne crop.

Mr Lamyman’s previous top OSR crop came in 2018, when he broke the then world OSR yield record with the hybrid variety Sparrow at a yield of 7.01t/ha.

Last year, Kent grower Richard Budd broke the world record with a crop of the conventional variety Campus yielding 7.19t/ha even when drilled late on 14 September.