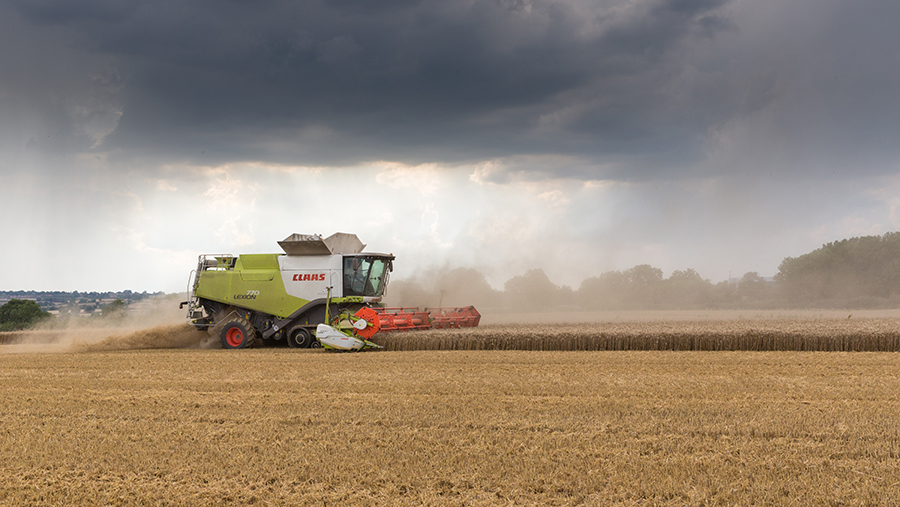 Combines are being put to bed across much of the UK, with most farmers glad to see the back of harvest 2020.

Isabel Udale-Moseley finished harvest on 6 September at Eyton House Farm, near Telford, with slightly mixed results. “Fortunately we drilled 100ha in September, so we finished the winter wheat before the rain,” she says.

“But we had a big gap through August waiting for the Planet spring barley, and that has suffered from a lot of secondary growth.”

Although she sprayed it off, green grains meant she had to dry the ripe grain down to 11-12% to reduce the overall moisture content sufficiently.

“Although the grain had good specific weight, yields were up and down, with some fields better than others.”

Wheat yields were dependent on drilling date, with September-sown crops yielding better than average and October-sown crops less exciting. “The January-drilled field was definitely nothing to write home about.”

However, specific weights were good, with Costello, Dunstan and Gleam all in the 80kg/hl bracket.

Richard Kane has 48ha left to combine at Broglasgow House, Myroe, and out of the 303ha cut so far, yields are below average.

It was a similar story with the wheat – Graham winter wheat achieved 8t/ha, while Quintus spring wheat yielded 9t/ha.

“The winter wheat was good-quality, but the spring stuff has been poor,” says Mr Kane.

With moistures coming in at 22%, the wet weather has hampered harvest progress. “We have had 30mm in the past five days [as of 18 September]. It has probably been the wettest spell in my farming lifetime – it’s been raining for 10 weeks on and off.”

Back on the mainland, Carl Tuer finished combining on 17 September, and is reasonably pleased with the results.

“The combine was parked up for a week after finishing wheat, and the beans were appalling – we puddled them in and the geese did more damage than anything else. They only yielded 2.5t/ha,” he says.

But the wheat was better, with first wheats averaging about 10t/ha and second wheats 7.5t/ha. “It’s disappointing, but given the year I think we’ve done reasonably well.”

Grafton first wheat yielded 8.9t/ha, with Barrel at 10.6t/ha. Skyscraper second wheat managed 8.1t/ha, and quality was excellent, apart from hagbergs. “We had two weeks when it was ready and we couldn’t combine at all,” says Mr Tuer.

Pearl winter barley yielded 6.75t/ha and made the high-nitrogen malting grade, while feed barley came in at 7.5t/ha.

Although the spring drought hampered crops, it has opened up the ground nicely for autumn drilling, adds Mr Tuer.

“All the first wheats after oilseed rape are sown and through, the oilseed rape looks fantastic, and I think the winter barley has gone into the best conditions ever.”

A little further north, Jim Macfarlane has finished the bulk of harvest at Edrington Mains Farm, near Berwick upon Tweed, and he hopes to start on his 24ha of beans – which look well – soon.

Disappointingly, the 17ha of Electrum winter barley yielded half the usual average due to less-than-ideal establishment.

However, 68ha of Laureate and Diablo spring barley was the hero crop – achieving 8t/ha. “I’m surprised because it never had any rain, but am really pleased – it has saved the harvest,” says Mr Macfarlane.

“Spring barley quality was good, with low screenings and spot-on nitrogen, but unfortunately there has been 2-3% skinning due to the storms before it was cut.”

The 55ha of Skyscraper, Extase and Jackal winter wheat averaged 9t/ha, with the highest yield at 13t/ha. “I had one field which did 7t/ha that pulled the average down. But specific weights were good, at 80kg/hl.”