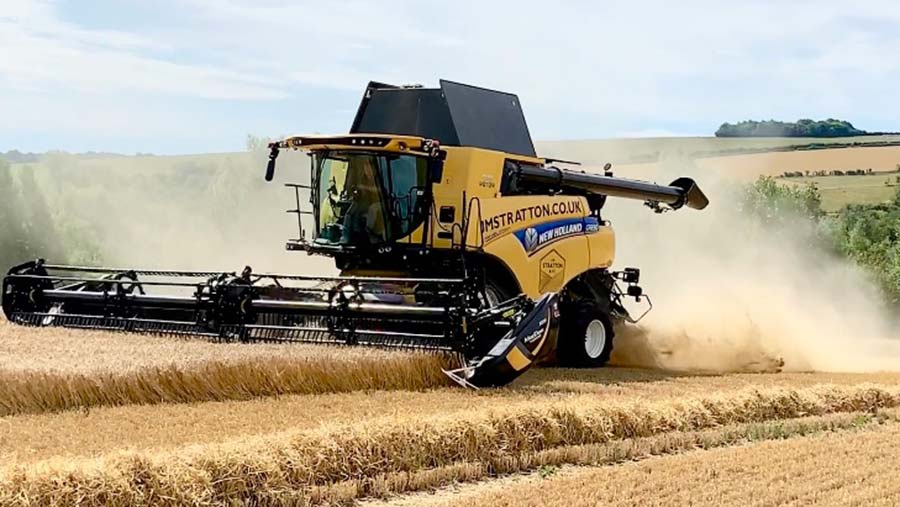 Oilseed rape yields are showing the damage from cabbage stem flea beetle infestations earlier in the season, but as the combines move into winter wheat there is optimism for better yields, especially for crops on heavier land.

“We drilled 40ha in reasonable conditions. But the wet winter followed by the dry period meant it was slow to grow away. On top of that we have also had cabbage stem flea beetle damage. Yields averaged 3t/ha which took us just over the 2.5t/ha we thought we might get,” he says.

He is expecting to start combining the 65ha of Graham and Zyatt winter wheat varieties in a week to 10 days – weather dependent. “Normally we would have drilled 100ha in the autumn but conditions meant we couldn’t get it all in the ground,” he adds.

Mr Tallis also grows 20ha of spring linseed, 20ha of canary seed and 30ha of peas. “Last year we grew marrowfats but this year we have the large blue pea, Mankato. It’s looking quite well and should be ready for harvest in about 10-14 days if the weather is right.”

Winter wheat harvest begin on lighter land earlier this week on July 27, with Skyfall coming in at 15% moisture and fairly average yield, but he anticipates better yields when he moves on to heavier soils.

“We have now finished winter barley and oilseed rape and have seen huge variations in yields,” he says.

Despite those variations, Mr Flatt thinks the winter barley has done better than expected. “It averaged 7t/ha with moisture below 15% at harvest – but we have had yields at both ends of the scale.”

Oilseed rape yields also varied dramatically, depending on flea beetle infestations. The worst affected crops yielded only 1-2t/ha. “But where there was little or no flea beetle it yielded up to 5t/ha – all came in below 9% moisture,” he says.

Harvest started on 11 July for Josh Stratton at East Farm, Codford St Mary. “The good weather meant we had an easy, dry winter barley and oilseed rape harvest – grain has been delivered and straw baled,” he says.

His 160ha of Craft malting winter barley showed an average yield of 8.5t/ha and specific weight of 69kg/hl, with a low level of screenings.

Mr Stratton also saw signs of flea beetle in his oilseed rape but surprisingly yields were only slightly affected. “Normally we would expect 4t/ha; this year the crop yielded 3.8t/ha,” he says.

He still has 500ha of wheat and 100ha of maple peas to harvest. He specifically chose Firefly, Gravity, Basset and Extase wheat varieties for disease resistance – notably septoria.

“We’ve introduced the peas as a new break crop to stretch out our rotations and a good introductory crop to wheat,” he says.

At Lower Almer Farm near Blandford Forum, the combines are due to start rolling today but Clive Tory has already had a few setbacks.

Winter wheat will be the first crop harvested – slightly later than normal due to the wet autumn – with 210ha of Zyatt, Extase, Skyfall, Graham, Kerrin and Firefly. “I like to spread the risk so drill several varieties with good disease profiles,” he says.

This year he has lost all the oilseed rape. “We drilled 101ha but it was all eaten by flea beetle. We replaced the crop with Planet spring barley and spring naked oats,” he says.

“The barley is looking good and surprisingly so are the oats – I put this down to the inch of rain we had just at the right time,” he adds.

Mr Tory also has 90ha of Tundra winter beans. “I’m very pleased with them at the moment, they are looking excellent this year.”