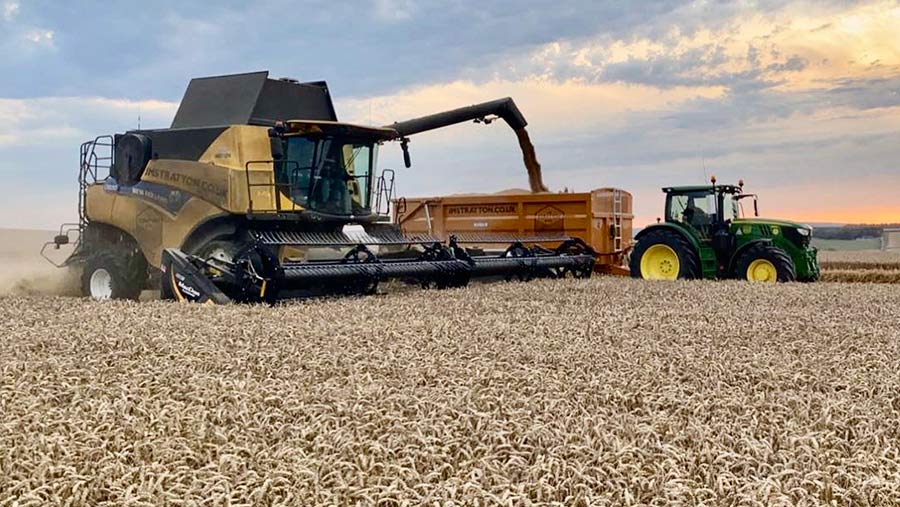 Harvest is progressing quickly this week, aided by the heatwave, with many finishing oilseed rape, barley and oats with a mixture of yields appearing.

Josh Stratton is 65% of the way through harvest at East Farm, Codford St Mary, Wiltshire, leaving 480ha comprising 100ha of wheat, 210ha of spring barley, 120ha of spring oats and 50ha of peas.

He has cut some Elyann spring oats this week, which he found disappointing in both yield at 6.5t/ha and a specific weight of 48kg/hl.

His Campus, Elgar and Aardvark oilseed rape varieties were also mildly disappointing at an average yield of 3.5t/ha. However, the 50ha of Rainbow peas were pleasing at 4.7t/ha – 1t/ha higher than last year.

So far, Planet spring barley has averaged 8.5t/ha with Laureate at 9.5t/ha. “Nitrogen was low at 1.6%, which will be good for distilling, and specific weights are in the high 60kg/hl,” he says.

Extase, Bassett, Gravity and Firefly winter wheats were pleasantly surprising at between 10.5t/ha and 12.5t/ha – averaging just over 11t/ha with specific weights of 80-82kg/hl. “Sunshine, good soil structure and digestate have all contributed to better yields,” adds Mr Stratton.

The 68ha of Barbados and Incentive oilseed rape yielded 3.5t/ha. “It’s below average, but we’re happy in this year. We have cleaned some of the oilseed rape as it was full of small seeds,” says grower Rob Bennington

So far, the wheat quality is reasonable with specific weights of 80kg/hl on the small amount cut so far. He hopes to make a “proper” start on his 32ha of Illustrious wheat next. “It’s looking variable; the spring crops look alright, but the winter ones are nothing special.”

Over in the East, harvest got off to a strong start for Stuart Baker at Ivy House Farm, Woodbridge, having finished Diego and Grafton winter wheat, which averaged 9.8t/ha and 9.6t/ha, respectively.

The best first-wheat yield was Gravity at 10.6t/ha, while Barrel achieved 8.8t/ha. “I normally expect 11t/ha from first wheats, but it’s not a disaster,” he says.

Belepi spring wheat had varied germination due to the challenging spring weather. “It’s 13.5% moisture, but it’s not fit. Having finished one field, it has done 7.2t/ha which is okay,” adds Mr Baker.

Quality has been good with specific weights reaching between 74kg/hl and 81kg/hl – an improvement on last year, he says.

The 51ha of Expansion and Helga oilseed rape was relatively successful, averaging 3.5t/ha.

Gimlet winter barley averaged 9.2t/ha – 1t/ha below the usual average. “It was the first time we have grown Gimlet and I would grow it again – it produced a lovely sample,” he adds.

Mr Baker plans to move onto 25ha of Planet spring barley next, which, based on neighbouring farms’ results, is likely to achieve about 7.5t/ha.

Up in Scotland, harvest is progressing nicely at Kirkton Farm, Kinellar, where Scott Campbell has finished winter barley, oilseed rape and winter oats, and is now turning his attention to spring barley.

The 32ha of Platinium oilseed rape has topped the five-year average at close to 4.5t/ha, and he is pleased with the 10ha of Eagle winter oats too, which averaged nearly 10t/ha at a specific weight of 52kg/hl. “We are going to double the acreage next year,” he says.

The Tower winter barley achieved 9.5t/ha, whereas the Kingsbarn yielded 10.5t/ha – both at 20% moisture. “On the lighter land, specific weights were slightly lower at 61kg/hl. On the rest, I’m hoping it will be above 63kg/hl,” he says.

In the field, his 242ha of spring barley is looking big and bold. “After this, I will move onto 40ha of winter wheat which a bit greener this year, due to using the new Revysol fungicide,” he says.