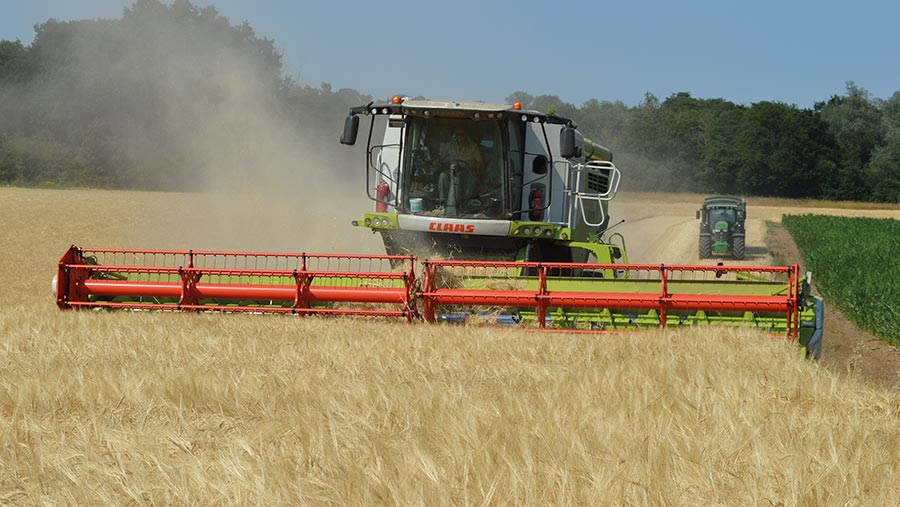 Early spring malting barley crops are showing good yields and quality across southern England, helped by April and May rainfall, while other crops into East Anglia have suffered from the drought.

Crops on the chalklands of Hampshire, Dorset and Wiltshire are showing promising harvesting results, although those further east suffered in the bone-dry May and yields and quality are down on last year.

Some early crops south of the M4 motorway showed yields of 7-8.5t/ha, and many have low nitrogen contents of 1.35-1.55%, which the maltsters prefer. East Anglia was braced for lower yields and higher nitrogens.

One of the early-harvested crops was in Dorset, where farm manager Martin Ford has just finished cutting 140ha of the variety Propino, yielding 8.2t/a with a respectable specific weight.

“We are very pleased with the Propino – it did well through the drought and seems to like our light chalky soils,” he says.

See also: Harvest 2020: OSR yields down but optimism for wheat

Most maltsters look for a nitrogen content below 1.65% for distilling and specialist beers, while mainstream brewers can use barley up to 1.8% nitrogen. They are likely to have plenty of barley to chose from due a massive spring barley crop and a fall in malt demand due to the coronavirus pandemic.

Mr Ford has a further 50ha of the variety Laureate to cut, which should be ready this week, and he is looking for a yield of 8t/ha on the Charborough Park estate between Blandford Forum and Wareham, where he is manager.

“We are seeing good, consistent spring barley crops south of the M4 with lower nitrogen, helped by the rain in April and May,” he says.

Mr Arnold adds this follows the picture of winter barley when Maris Otter crops in the South produced good yield and quality while crops in Norfolk threw up some higher nitrogen numbers, again reflecting the spring rainfall

Further east, David Taylor, farming on the South Downs in East Sussex, is looking to finish his 150ha of Planet spring malting barley this week with yields currently running at 6.5-7.0t/ha.

“We are reasonably pleased with the yield and the harvest is going well considering the difficult year we have had weather-wise,” he says. The crop is just being harvested and there is no indication of quality on his 500ha Housedean Farm, between Brighton and Lewes.

In Hampshire, Sam Burge is set to start on 80ha of Planet this week and says his crops look variable after a disappointing harvest of Maris Otter yielding less than 6t/ha, when he expected 6.5-7t/ha, although nitrogen levels were low at 1.3%.

Other crops have been better, with Barbados oilseed rape yielding 3.6t/ha and Gleam feed winter wheat yielding 10.5-11.0t.ha at his Vale Farm, just west of Winchester.

Up in north Norfolk, the spring malting barley harvest is likely to start in earnest in the next few days. Bob King, commercial director at the Crisp Malting Group, says winter malting barleys yields are down 10-20%.

“Winter barleys show disappointing yields and quality due to the dry May, with nitrogen levels variable, but on the high side, as there was no nitrogen dilution,” he says.

He cut 40ha of the malting variety on Monday and hopes to make good progress this week at Wroxham Home Farm, on the edge of the Norfolk Broads, just north-east of Norwich.

Tom Dye, managing director at Albanwise Farming, runs two estates in north and west Norfolk and says spring barley harvest is still a few days off after winter barley and oilseed crop yields were 20-30% down.

Winter wheat had faired better, with yields averaging 9t/ha when they normally look for 9.6-9.7t/ha at the two estates at Saxlingham, near Holt, and at Barton Bendish, near Kings Lynn.

Maltsters usually buy 1.9m tonnes of malting barley annually from an anticipated 8m-tonne barley harvest this season, but the Covid-19 crisis has caused big stocks of malt and barley to build up in the market as beer demand dipped.

Traders say the maltsters may need only 1.6m tonnes this season, and while the winter barley area is estimate to be down 34%, spring barley is up a massive 52% at more than 1m hectares.

If the spring crop comes in with average yields, the overall barley crop could be similar to 2019’s 8m tonnes. With plenty of barley in the market, feed barley prices are depressed and trading at a big £35/t discount to feed wheat, says Glencore grain trader Tom Eaton.

“Winter barley is largely in the barn, with yields down about 10% on the long-term average at 6.5t/ha, while we are only seeing small amount of spring barley from the south coast,” he says.

Tom Bradshaw’s winter wheat yields in Essex were about 2t/ha – or nearly 20% – lower than usual after a wet winter and spring drought cut grain output.

Yield across his 340ha of the milling varieties Zyatt, Siskin and Extase yielded 7-7.5t/ha, compared with the usual 9-9.5t/ha, cut at between 11-13% moisture after there was little rain between March and June.

Mr Bradshaw’s farm manager, Oli Beckerlegge, at farming business Proagri, says the crops were short on straw and thinner than usual due to the adverse weather, but they have not had results back on quality yet.

“There were some big ears and bold grains, but simply not enough of them,” he says, after completing the wheat harvest with two 35ft-header Case 9230 Axial-Flow combines. 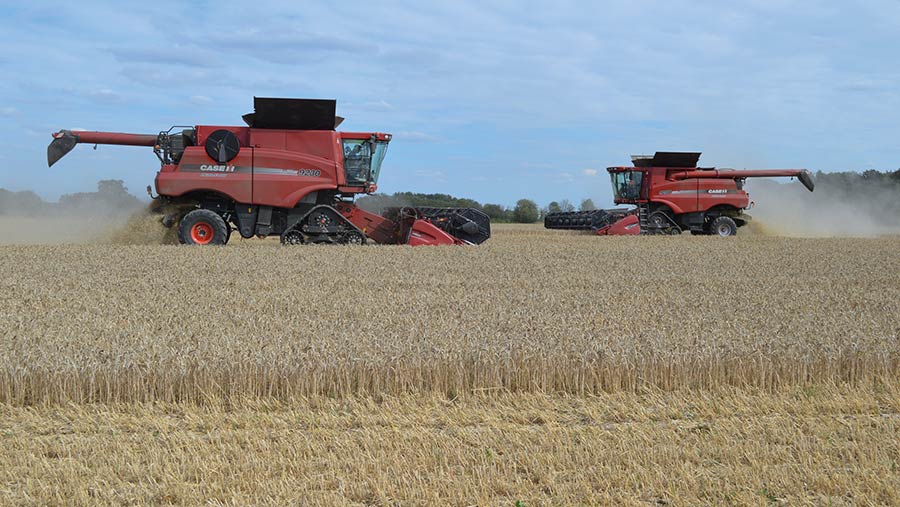 The farming business has switched largely to Group 2 wheats, such as Siskin and the newer Extase due to the added expense of growing Group 1 wheats in terms of hitting the protein requirement.

Mr Bradshaw, who is also NFU vice-president, is based at Fletchers Farm, Fordham, near Colchester, and his main arable business is 1,250ha of whole-farm contracting, growing crops within a 20-mile radius of the home farm.

Other wheat growers are reporting lower yields, but say grain quality – in terms of protein, hagberg and specific weight – is generally good, although some are reporting variable protein levels.

Grain traders are forecasting a sharply lower wheat harvest from the smallest wheat area in the ground since 1978, with heavy winter rains followed by a parched spring set to cut yields from the 2019 average of 8.9t/ha.