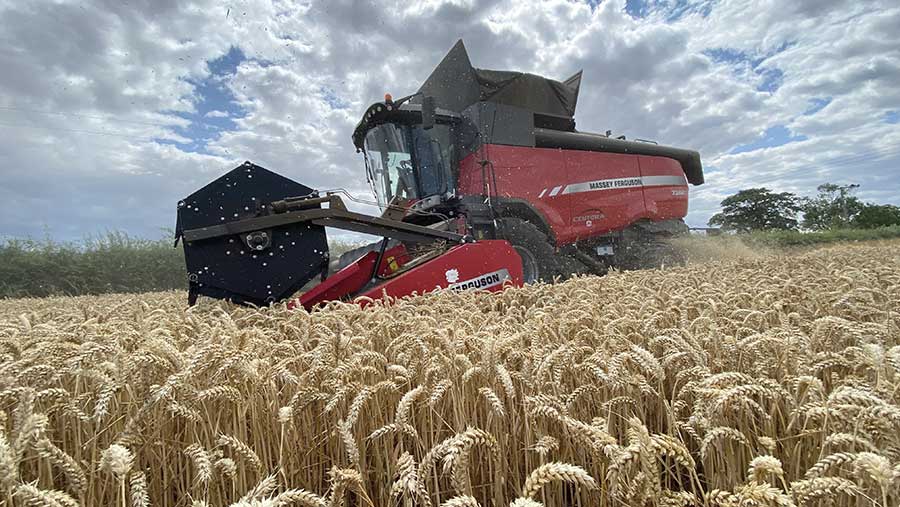 Harvest is moving on across the country, with a continuing trend of yield variability but with quality largely exceeding expectations.

Six-row barleys, however, are so far proving to be disappointing.

Winter barley has been coming in at under 15% moisture with specific weights easily making 62-64kg/hl, says Cecilia Pryce, head of research at Openfield.

Although not much wheat has arrived yet, she is expecting varied results. “This year some farmers were not able to get winter varieties into the ground until well into the new year,” she explains.

“We have farmers who have planted in some appalling conditions. Milling varieties have been grown as feed wheat – so any variety-specific quality results should be treated with caution.”

Winter barley started moving off farm in Cornwall two weeks ago, according to Mike Freke, director at Mi-Grains in Perranporth.

“Quality is very good with yields being better than expected,” he says. “We’ve had farmers reporting yields above 7.4t/ha – for most, winter barley has come off nice and clean, averaging 6.8t/ha with specific weights about 68kg/hl.”

According to Mr Freke, the area still favours the tested variety Cassia, although a few have grown hybrids and six-rows.

“The six-rows have been terrible – a lot of farmers have kept the grain for feeding because the quality was poor. I put it down to the weather; when the crop needed sun we just had a lot of rain.”

However, oilseed rape is yielding above the national average. “I have heard it is better down here than in other parts of the country – one of my customers in Callington had an average yield of 3.7t/ha.”

Moving east, Hampshire has seen a reasonable start to harvest and although winter barley yields have been variable, quality is excellent, says Jonathan Arnold, trading director at Robin Appel.

“Winter barley is coming in at 11-13% moisture with very low screenings,” he says. “Varieties like Maris Otter are achieving up to and over 7t/ha and we are seeing specific weights of 74-75kg/hl.”

However, some farmers have been disappointed with six-row varieties, he adds.

As for malting varieties, Laureate is averaging about 1.45% nitrogen and Propino 1.65%.

Spring barley looks promising, and winter wheat yields are averaging 10-11t/ha with good specific weights above 80kg/hl. Milling wheat Hagbergs are well into the 300s. “It is early days; yields are there, but we could see headlands and less favourable areas pulling down averages,” Mr Arnold says.

“And the extended dry spell followed by rains has also caused secondary tillering and green grain.”

It has been a slow start across in Gloucestershire because of the delayed drilling, and the drought in May has hit wheat crops the hardest, according to Philip Smith at Western Arable Services.

“Winter wheat yields are variable; farmers are disappointed, with yields at the lower end of 7.4t/ha. The wet autumn meant crops struggled to get roots down, then the dry May damaged the shallow-rooted crops.”

However, milling wheat quality looks promising, with specific weights of about 82kg/hl and Hagbergs of 360-394 seconds. Moisture contents have been between 11% and 12% with protein at about 13%.

Winter barley is now finished locally, with yields averaging just 6.1t/ha. “But it has produced good samples at 14-15% moisture with specific weights between 61kg/hl and 64kg/hl,” he says.

The latest to be combined is winter linseed, producing yields of 2.5t/ha, and Mr Smith anticipates a start on winter beans in the coming weeks.

The overall picture is that yields and quality are varying widely, and the coronavirus pandemic is causing delays with sample results, says Openfield’s Cecilia Pryce.

To comply with health and safety, much of the trade are relying on farmers to take their own grain samples, she says.

“It’s going to be very difficult to work out the size and quality of this year’s crops. Such variation will also leave processors having to decide how much flexibility they can cope with to meet their requirements and at what cost this may come for any grains not meeting minimum specifications.”