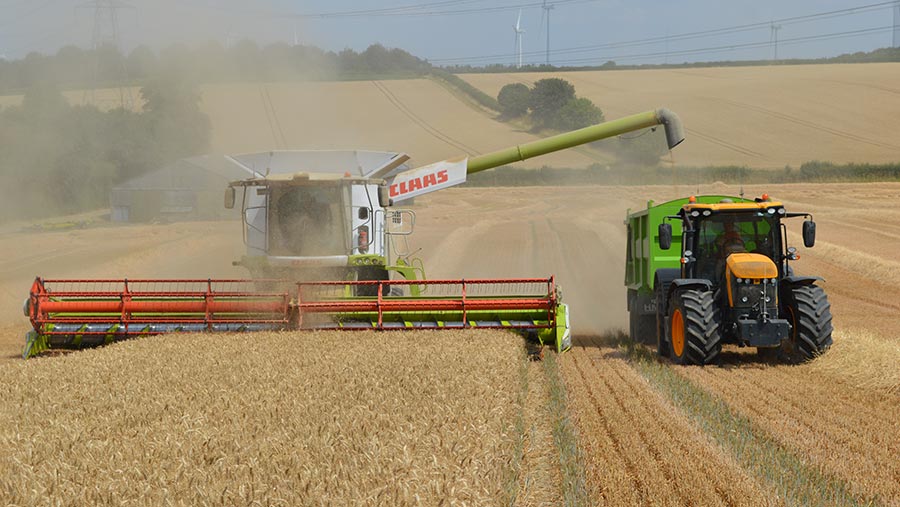 After a difficult growing season quality in terms of protein, Hagberg and specific weight are generally fine from a low-yielding wheat harvest set to be down 40% from last year.

Early results from East Anglia show many breadmaking wheat crops in a 5.5-9t/ha yield range from light land, with many growers hoping for better yields as combines move on to heavier land.

Essex grower and former NFU deputy president Guy Smith had his earliest ever start to wheat harvest and completed it last weekend with yields described as “mediocre to bad”.

“I cannot remember a worse season than this, and I am now focusing on 2021,” he told Farmers Weekly after a prolonged spring drought followed a wet winter.

He started cutting his 118ha of the winter wheat variety Crusoe on 19 July, with yields varying from 5 to 9t/ha compared with a normal average of 8.5t/ha, as crops suffered with only 30% of average rainfall from mid-March to mid-July.

Grain protein at 13.7% was above the milling standard of 13%, and Hagberg and specific weight values were also above minimum requirements of 250sec and 76kg/hl, at a grain moisture of 13%.

On a more positive note, the milling wheat was sold off the combine at £185/t with lower growing costs, including just two fungicides, no plant growth regulators, one herbicide and only 190kg/ha of nitrogen fertiliser.

Mr Smith farms heavy clay and clay loam soils near the Essex coast in one of the driest area of England at Wigboro Wick Farm, St Osyth, near Clacton-on-Sea.

Further west in Cambridgeshire, Andrew Tetlow is seeing lower yields on his early-cut wheat on light land with variable protein levels, but Hagberg and specific weights up to millers’ standards.

“Yields are not as good as we had hoped and protein contents have varied between 12% to over 13%,” he said.

Dry weather may have had an impact, with nitrogen not taken up quickly by crops in the drought, although a lot of nitrogen was applied early in the season. However, Hagberg levels were 260-270sec and specific weight up at 80kg/hl.

He is hoping for better yields as harvest progresses and he moves on to heavier, more fertile, land. Mr Tetlow is a partner of AWT Farm Services, farming about 2,000 arable hectares for a number of landowners in Cambridgeshire, Essex and Suffolk.

In Essex, Tom Bradshaw is moving into the bulk of his winter wheat this week after cutting one field of the variety Siskin on some poor land, yielding 6.6t/ha.

“We are not expected exciting yields, at best average, and they could be worse than average,” he said.

Mr Bradshaw is growing 340ha of Group 1 Zyatt and Group 2 Siskin and Extase milling wheats at Fletchers Farm, Fordham, near Colchester. He was elected NFU vice-president in February and was previously chairman of the NFU’s combinable crops board.

Grain traders are predicting a much reduced harvest, with the smallest wheat area in the ground since 1978, with a wet winter and spring drought reducing yields from 2019’s 8.9t/ha.

“Initial samples show good quality, but the next 10-14 days will allow more growers to get going and a clearer picture to emerge,” he said.