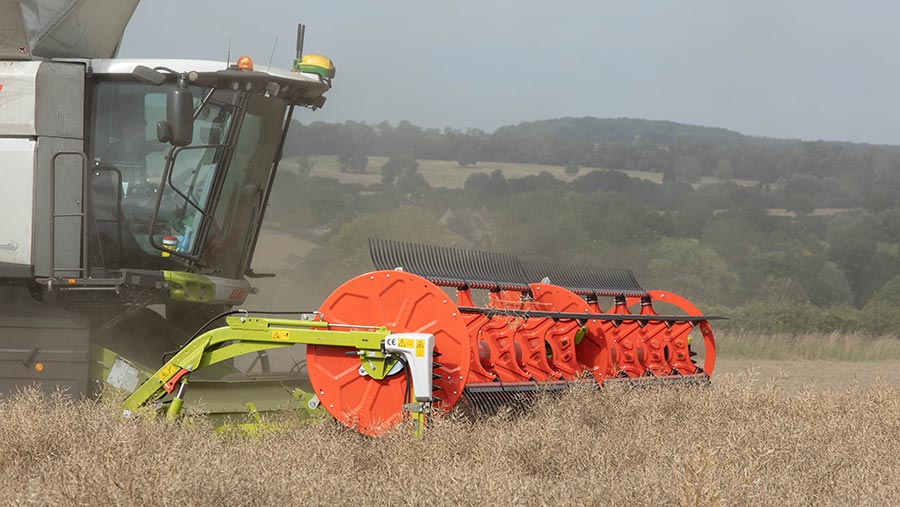 Harvest has begun to move across more of the country and into North Yorkshire, with highly variable yields reflecting differences in weather seen across the UK this season.

In Kent, it is still early days, but the delay in harvest and lower yields are being felt, with between 10% and 25% less grain coming in than an average year, according to Robert Preston, regional sales manager at Frontier Agriculture.

“Winter barley yields are down by around 10-15%, oilseed rape by 20%, and wheat by 10-25%. The variation in yield echoes the variation in weather across the county over the past 10 months,” he says.

Milling wheat samples are showing variable protein levels, although it is still too early to know the true impact, says Mr Preston. “Specific weights are good on both wheat and barley, with 76kg/hl on milling wheat and 63kg/hl being achieved on the majority of barley samples seen so far.

“Although we are seeing variations early on in the harvest, importantly the grain is still of marketable quality.”

Further north, weather has impacted yields of barley and wheat, according to Philip Darke, operations manager at CamGrain.

“Feed barley is yielding between 5.5t/ha and 8t/ha, with the lower yields seen in burnt-up areas,” he says. However, specific weights have fared well at 65+kg/hl.

“Skyfall is yielding between 5.5t/ha and 8t/ha, with the lower yields coming from crops suffering drought damage,” he adds.

In general, specific weights have been good at around 80kg/hl.

Craft malting barley has shown fluctuating nitrogen levels of 1.6-2.1%, due to the drought-induced variation in yields.

“It is still early on, but in about 10 days we will have a better picture of the harvest ahead.”

In Lincolnshire, Dan Murphy started intaking grain at Woldgrain in the week commencing 20 July, with around 3,000t arriving in the first week – 1,800t winter barley and 1,200t oilseed rape.

“Feed barley is coming in with good specific weights that remain above 63kg/hl and average around 68kg/hl – but moisture is variable at 15-16.5%,” he says.

Screening results look good on malting varieties, but lower yields are likely to produce higher nitrogen contents. “We are expecting 2,000t of malting barley, but anticipate nitrogen levels above the 1.85% target,” he says.

Oilseed rape yields are disappointing. “Growers were realistic from the start with yield predictions of 2.5t/ha – we are expecting 6,800t in total which, in comparison to our best year in 2015 at 18,500t, is quite the fall.

“Even last year, we took 13,000t – a combination of wet conditions and cabbage stem flea beetle have really pulled down yields, and some growers have had to redrill with spring crops,” adds Mr Murphy.

The big challenge will be the compression of the bulk of harvest into the latter half of August with the addition of spring wheat and oats to the rotation.

Up in Yorkshire, winter barley is the first crop to start filling the grain silos at Argrain, and is proving to be a mixed bag, according to the company’s David Padgett.

“Good conventional winter barley yields are coming in at around 7.5-8t/ha, but the average sits closer to 5t/ha,” he says.

“Some hybrid varieties are managing 10t/ha, but these crops are certainly thin on the ground.”

Location and soil type have been key to this variation. “In the drier parts of the county, they have struggled to get crops away.”

Barley is averaging around 15% moisture and specific weights are good at 64-65kg/hl, says Mr Padgett. “Malting barley is sitting at higher nitrogen levels.”

Oilseed rape is yet to start arriving. “We are expecting to be down by 50% this year – a combination of cabbage stem flea beetle and the poor drilling conditions,” he explains.