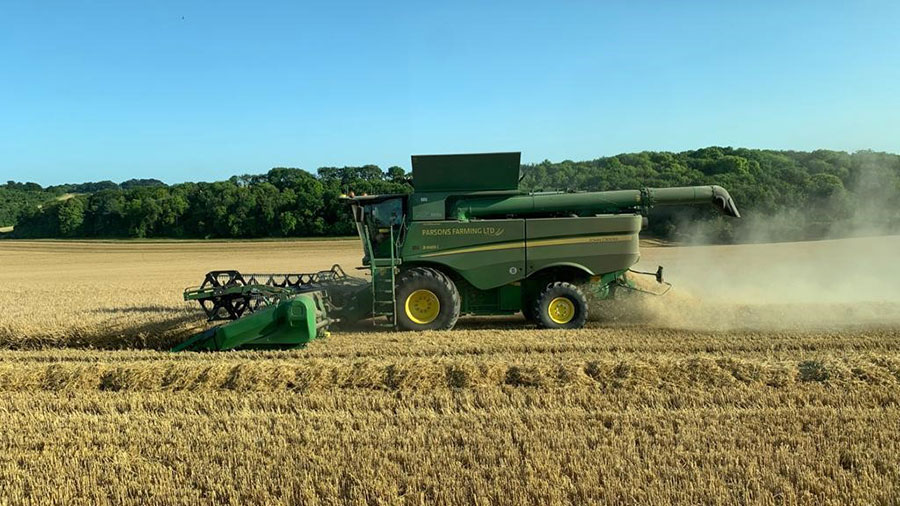 After a short period of dry weather to get early crops harvested, winter wheat is now either coming in wet or combines have come to a halt in the current showery weather.

Septoria disease is also an issue in wheat crops, which could see losses in the coming weeks.

The South East has been just as badly affected by the weather as anywhere this season, according to Tim Lock at Houghton Farm, Arundel. He opted to start his winter wheat while it was still wet, due to concerns over quality.

“The highest moisture was 20%, down to lows of 17.5%. I think it’s all held its quality, but it won’t for much longer,” he said. Mr Lock has cut 28ha of the milling variety Zyatt, which yielded about 10t/ha.

He has another 28ha of Zyatt left to cut, plus some Illustrious and Firefly. Like other growers, he has had septoria issues with Firefly. “I have thrown the kitchen sink at it in terms of fungicides but, thankfully, I only have 16ha of it,” he added.

Of the 202ha of Planet and Laureate spring barley, about 65ha is looking flat. “The barley is only just there, and there are a few secondary tillers. One week of decent weather and hopefully it will be salvageable,” he said.

“Ambassador yielded about 3.2-3.5t/ha and the Campus 3-3.2t/ha. Nothing really exciting, but it’s on par with the five-year average,” he said.

Unfortunately, the rain in June caused septoria issues in Mr Parsons’ wheat crops. “It went through the wheat like Billy-O and we did a T3 spray. I’ve got Firefly and it’s just broken down with it.”

He has cut some Crusoe, which has averaged 9t/ha – compared with 10-11t/ha last year and 12t/ha two years ago. “The wheat is only just fit because of the lack of sunshine, and despite cutting at 18% moisture, it looked like the combine was on fire due to the dust,” he added.

Weather is also the predominant theme for Ben Atkinson at Grange Farm, Rippingale, between Grantham and Spalding. “We had a good early run and got the early crops in over 10 consecutive days of combining,” he said.

Oilseed rape averaged 3.5-4t/ha, which he is relatively pleased with. “Five years ago, I would have been disappointed, but there is a new normal and you’ve got to revise your yield expectation.”

Kingsbarn and Kingston six-row hybrid winter barleys were a similar story, yielding 8.8t/ha. “These are good varieties with ground coverage and blackgrass suppression,” he said.

The only disaster was the winter linseed, which resulted in a combine fire from the long fibres wrapping around the augers and bearings. “Thankfully, the whole combine didn’t go up and two days of solid work by Claas had it back working again.”

Mr Atkinson has just started winter wheat, which is yielding a good average of 9t/ha.

Further north, Sandy Norrie feels he has been awfully lucky at Caverton Mill, near Kelso. “Everything has come in at 14-17% moisture, and for our part of the country anything under 20% is good,” he said.

Mr Norrie added that he has cut 648ha of winter barley, which averaged about 9.1t/ha. “It’s probably just on the five-year average and looked really good, but got burned up in the first two weeks of June.” The quality is mixed, with the six-rows suffering low specific weights.

Mr Norrie’s best yielder was Mountain at 10.6t/ha, but he only grew 12ha. Kingston also did well at more than 9.9t/ha, with better quality than the other hybrids.

He has now swathed 526ha of oilseed rape, as it’s generally too windy to spray off in the area. “It looked to have big, bold pods and I am really happy. I am quietly confident, but it’s all weather dependent,” he added.