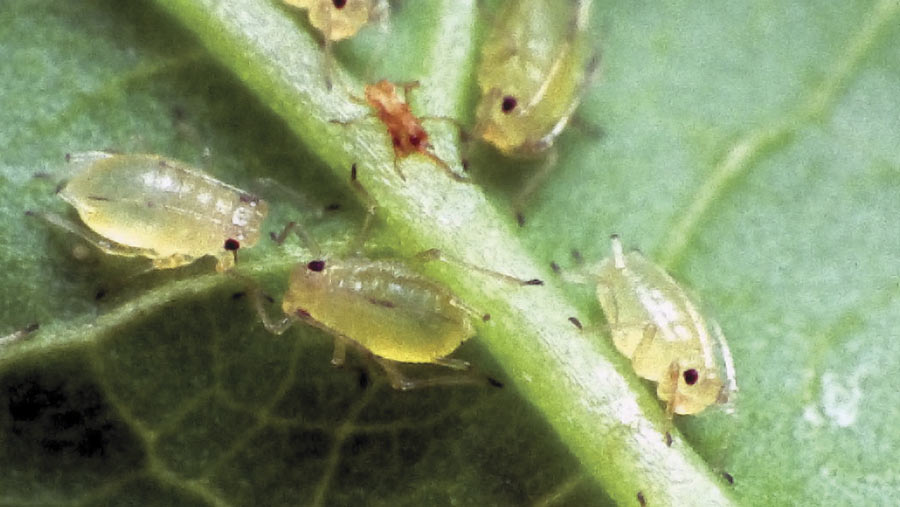 Oilseed rape growers now have a high-yielding option that offers resistance to the turnip yellows virus, which can reduce yields by up to 30%.

Architect is the only variety on the current AHDB Recommended List that has resistance to the virus. It replaces Amalie, which was some 10% behind the top yielder for gross output on the previous year’s list.

David Bouch, seeds manager at Hutchinsons, believes if a farmer is growing hybrids or a mix of hybrid and conventional types, Architect should be one to consider as part of the variety mix.

“It can help with risk management and is the only one on the list offering turnip yellows resistance. Also, it is only 2-3% behind the mainstream varieties on yield,” he says.

The Limagrain variety is the result of the company’s German breeding programme, which has a good pedigree for turnip yellows virus resistance. It has nine varieties at the moment, plus more in the pipeline.

Turnip yellows virus is spread by peach potato aphids and monitoring last year found high levels of infection, with some sites showing 100% of aphids were carrying the virus.

Insecticides can be used to control the disease; however, getting the timing right can be difficult, as it varies year to year, says John Challans, seed specialist at Nickerson Seeds.

“If you spray a crop and it happens to be the tail end of a peak, they can come in again to infect the crop. The spray is only effective for 10 days, so it is difficult to hit migration of aphids,” he explains.

“So by the time you see aphids, it [the disease] is already there and it is too late.”

Mr Bouch believes farmers can use Architect to help manage risk, acting as an insurance in a high disease year.

“By growing one to two fields of the variety, farmers don’t need to worry about the disease across this area,” he says.

It is not just about turnip yellows; the variety brings other agronomic benefits including strong vigour and pod shatter resistance.

“This allows good establishment and restart of growth in the following spring, even under unfavourable conditions in the field,” he says.

Mr Bouch sees the value of pod shatter resistance, offering some protection against losses during summer storms. “This is becoming more and more important,” he says. “I have seen empty pods in crops without pod shatter resistance after a storm, while in a variety with [resistance], the pods were largely intact.”

Mr Bouch says one minor quibble is Architect’s stem canker disease rating of five, which is a little low – ideally he would like to see a rating of at least 6.

He also points to its performance in the north with a gross output at 99%, of control, which is a little behind the top yielder. Therefore, he believes it is more suited for growing south of the Humber.

So what are the yield benefits? Mr Challans highlights European trials carried out in 2015 and 2016 showing that yields increase as turnip yellows virus levels rise.

The variety delivered an 11% yield advantage at sites with very high infection levels.

He says this equates to 0.5t/ha in a high-disease pressure situation. Pod shatter resistance brings another 0.4t/ha in a high-risk situation, adding up to nearly 1t of extra yield.

Resistance to turnip yellows virus is also set to become a key feature of varieties from fellow breeder DSV, with a candidate up for recommendation later this year.

Temptation could be the first UK variety from DSV to carry full resistance to the virus, says Sarah Hawthorn of DSV UK.

“Working with our colleagues in Germany, we’re confident that virtually all new DSV varieties will carry turnip yellows virus resistance, with trials across Europe showing very impressive results,” she says.

The breeder says Temptation has strong autumn vigour, which makes it suitable for medium-late drilling.

It has a disease rating of 6 for light leaf spot and 5 for stem canker and in 2017 was ranked number one in France.