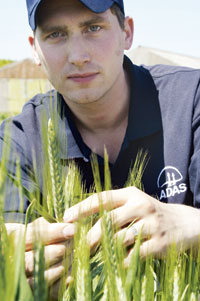 Triticale could be a viable option as a second cereal, according to trials conducted by ADAS.

The trial on clay loam soils saw triticale achieve yields of 12t/ha compared with 10t/ha from JD Diego and Istabraq winter wheat using 50kg/ha less nitrogen, ADAS’s Daniel Kindred explained. “If we can repeat those yield differences, it could potentially change what we grow as a second cereal.”

Triticale could be used for both animal feed and bioethanol production, he noted. Potentially producing higher yields using less nitrogen could be particularly important in the latter, when greenhouse gas emissions during production are considered.

Currently triticale usually sold at a £10-15/t discount to wheat, he acknowledged. “Part of that might be because the hassle factor for the merchant. As far as I am aware it is just as good an animal feed as wheat. If a greater volume is grown then its price could move closer to wheat.”

Yellow rust was the main threat when growing the crop. “But it can be controlled.”

More trials, including a couple funded by HGCA, were ongoing this season to further investigate triticale potential. One was comparing winter wheat, winter barley, oats, rye and triticale on the same site, Dr Kindred said.

A further project had been proposed that would analyse the benefits of triticale, including tests for performance at the Ensus bioethanol plant.