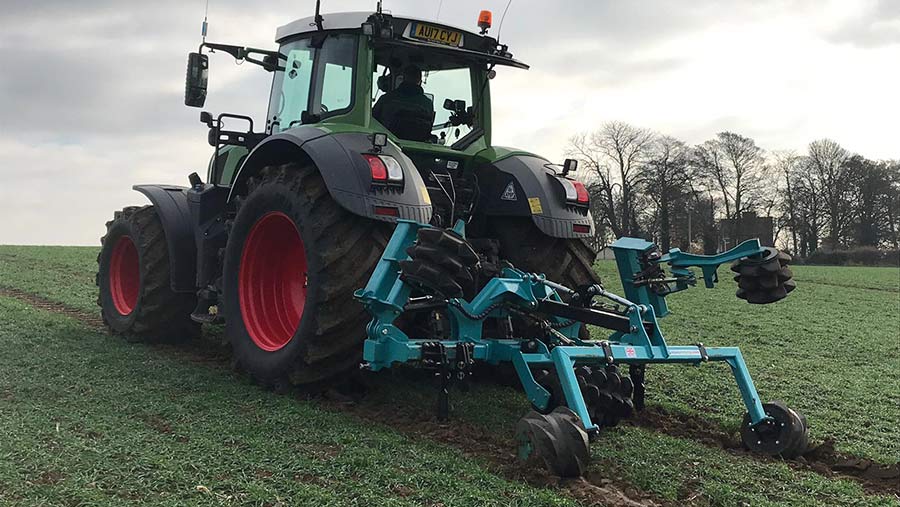 The Wheeltrack Roller, a tramline disrupter to redivert surface run off back into crops © Oliver Scott

A whole-farm approach to water management has seen a Norfolk estate introduce measures that have returned 45m litres of water to the environment.

Working with the Norfolk Rivers Trust as part of the Water Sensitive Farming initiative, Thelveton Estate took the opportunity to address the risk of soil and water movement across the farm and limit any related pollution, prioritising areas where action was required.

As a result, the 1,600ha farming business has put some practical interventions in place that keep both soil and water in the fields, improve infiltration rates, prevent erosion and disrupt some of the pathways – mainly wheelings and tramlines – that allow run-off to occur.

While these measures have cost just over £3,000, with some additional in-kind labour costs of approximately £1,000, the results have made a considerable difference to water management across the estate, which is in the River Waveney catchment.

At the same time, the work has delivered multiple other benefits related to water quality – an important part of future agricultural policy. These include better nutrient retention, a biodiversity boost and natural flood management, as well as improving soil health.

Doing it on a farm-scale approach has allowed habitats to develop and connect, while sand and silt deposits have been put back on the fields, and water flow to low-lying areas has been slowed.

Recognising the need for resilience, the estate had already moved to limit soil disturbance, make use of cover crops and improve soil health, all of which have contributed to the final result and helped the business deal with unpredictable weather events.

Back in autumn 2018, Thelveton’s previous farm manager Oliver Scott and Norfolk Rivers Trust’s head of farming and water Ed Bramham-Jones started to look at on-the-ground measures that would support the environment and sustainability, while addressing problems caused by downpours on compacted wheeled areas. 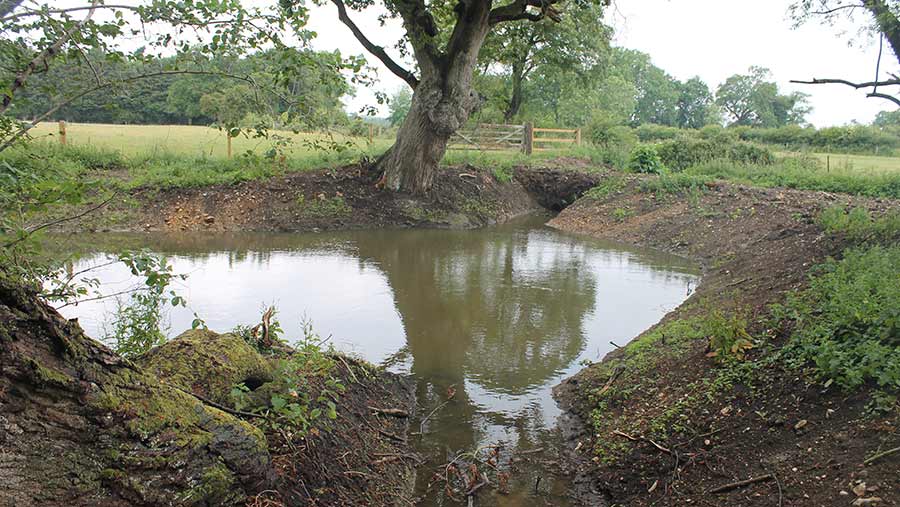 “We knew that these were a major cause of run-off,” says Mr Bramham-Jones. “So we looked at how we could prevent this and get the water infiltrating, rather than channels forming and water containing sand and silt ending up where it wasn’t wanted.”

Having seen immediate results from using the Creyke Wheel Track Combi, similar work has now been carried out over 57ha.

Silt traps were also constructed in strategic locations, with some being placed in ditches where deepening and widening work had been carried out.

Where appropriate, wetland features were created, with the aim of slowing the water and holding it.

Three pieces of wheeling equipment are available for farmers to trial through the Water Sensitive Farming initiative, after studies showed that as much as 80% of run-off is down wheelings and tramlines.

This machine intercepts rain and irrigation water and alleviates bed compaction. Leading tines create a suitable route for wheeling water, as well as heaving the edge of the bed to increase water infiltration. Secondary tines use free soil to generate “heaps and hollows”, which catch and dam running water.

The Wonder Wheel also directs water to the edge of wheelings, so that it infiltrates into the crop-rooting zone.

This reduces water run-off in tramlines by holding water in mini reservoirs formed by its plastic roller, with infiltration then taking place down drainage channels under the adjoining crop.

The concave-shaped centre section gives a compacted centre of the tramline and ensures that water flows into the reservoirs, while maintaining a dry pathway. This machine can be adapted for use in combinable crops and ridge/bed grown crops.

This has corkscrew blades, drawn along the ground like a roller, which cut diagonal drainage channels across the tramlines every 2m, dispersing water that has accumulated and allowing it to drain freely.

All three pieces of equipment are owned by the Broads Authority and are for use in the Broadland, Cam and Ely Ouse Catchment Partnership (CamEO) and Norfolk catchments.

“If you can slow the water flow, it means that silt particles are deposited,” explains Mr Bramham-Jones. “So in addition to having vegetation in ditches, we used ghost ponds and leaky dams, depending on the situation.”

Soil banks were created in field corners to help hold water, with sediment then being collected before it is returned to the fields.

A stream has been redirected to a ghost pond, while buffer strips and headland mixes have been established to protect watercourses and reduce water flow.

In addition, farm track work has changed track cambers, with grips and cross-drains connected to a silt trap running alongside.

“There was some engineering work required, which was done by the Norfolk Rivers Trust.” 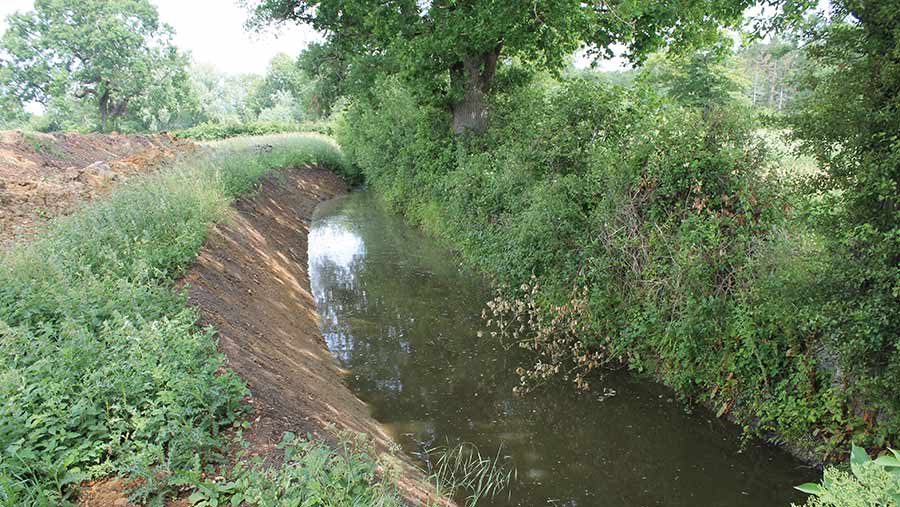 Ditch-widening encourages sediment to settle out of suspension © Oliver Scott

Looking ahead, he believes that a “public money for public goods” support system will encourage more farmers and growers to consider ways of influencing water quality and quantity.

“The Water Sensitive Farming initiative has provided additional funding for this purpose, which means farmers can go that extra mile. Often they are already in an agri-environment scheme, but would like to do more than an existing scheme allows.”

The enormous variation in farm types means that one-to-one visits are an important part of the initiative, he adds.

“What is appropriate on one farm is quite different to another, even those in the same catchment. Rotations, cultivations strategy and cropping type have a bearing, as does soil type and topography.”

What is the Water Sensitive Farming initiative?

A collaborative initiative, Water Sensitive Farming delivers the support and advice for on-farm measures that improve the quality and resilience of the surrounding water environment.

Funded by a partnership between the World Wildlife Fund and Coca-Cola since 2012, and latterly with additional support from Tesco, the initiative operates at a catchment scale and set out to develop bespoke and flexible solutions tailored to individual situations.

To date, some 220 farmers have received individual advice and follow-up visits, with more than 2,770ha of land use improvements delivered. More than 2.15bn litres of water have been returned to the environment already.

As Simon Aguss of the World Wildlife Fund explains, the work supports nature and farming by encouraging changes in farming practice, from the adoption of cover crops and buffer strips through to “slow-the-flow” type interventions, such as silt traps.

A voluntary scheme, with no obligation for farmers to engage, advice is provided free of charge across four management catchments in East Anglia.

“As well as improving freshwater quality, it delivers soil health and biodiversity benefits and helps farmers to reduce greenhouse gas emissions. It shows what can be achieved by working together.”

Water quality and returning water to nature in East Anglia is part of Coca Cola’s water stewardship commitment, he adds. In 2007, the company made a commitment to replenish all of the water used in the production of their drinks.

East Anglia was chosen because sugar beet grown in the region is a key ingredient in Coca-Cola’s UK products.