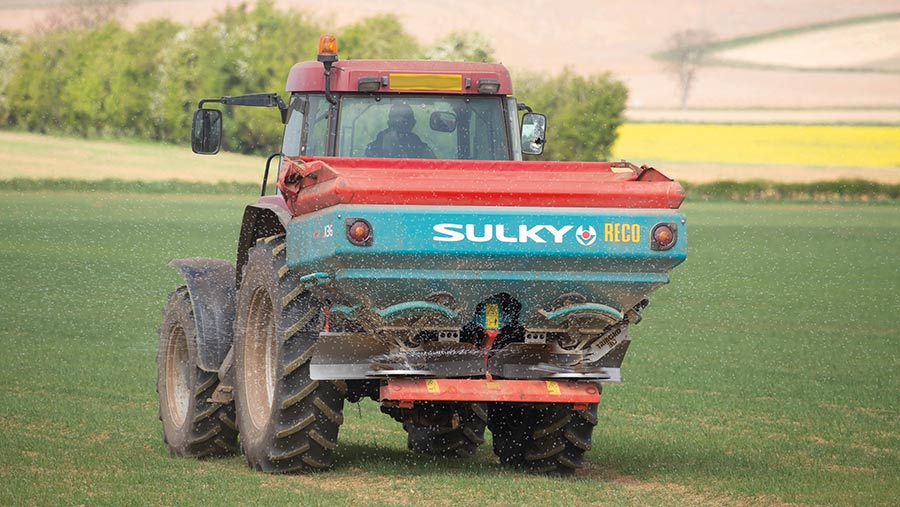 Most growers would like to move to a less chemical-dependent future, but while the theory sounds good, the practicalities are much more challenging.

Regenerative agricultural consultant and farmer Ben Taylor-Davies, owner of RegenBen, has headed down that path on his own farm, while also providing advice to others who are transitioning.

He suggests there are seven steps to moving towards a more biological-based approach, which he says will reduce inorganic fertiliser and pesticide inputs, lowering costs while improving business resilience.

On regenerative systems that follow these principles, he says input costs can be slashed by as much as two-thirds, while increasing profitability.

1. Start with a healthy soil

Moving to biology-based management is a major challenge for anyone who has been farming conventionally, says Mr Taylor- Davies.

Doing so requires healthy soil and a functioning soil food web with good levels of microarthropods, protozoa, springtails and nematodes which feed on bacteria and fungi in the soil. He says: “They have been decimated by pesticides, fertilisers and cultivations, and take much longer to come back.”

Healthy soils are much more likely to grow healthy plants, he says, but it takes time to rectify soil management.

“You can’t go cold turkey – you need to wean your soils off chemicals and fertilisers, and start to focus on living roots and building soil mycorrhizae and microbes in the rhizosphere.”

2. Buy a spade and do some in-depth soil analysis

While the temptation might be to buy a direct drill once the management philosophy has been set, the better initial investment is a spade, suggests Mr Taylor-Davies.

“A spade tells you whether your soil has earned the right for direct-drilling, and what type of drill you can use.”

Following up with more in-depth soil analysis, such as the one provided by Sustainable Soil Management, rather than the usual macronutrient analyses helps growers understand how soil is functioning biologically, chemically and physically.

“That’s a really important phase. It’s a journey that might take up anything from one to seven years before you have soil that can function effectively.”

3. Consider making your own biology

One possible technique for improving soil health is to kick-start it using a biological amendment, either bought in or, preferably, made from plant material from your own farm, says Mr Taylor-Davies.

“I’m a big fan of natural biology creation that is suited to your environment.”

Various methods of creating biology on the farm are possible, but none are particularly quick, he admits.

“Using a Johnson-Su bioreactor, which can be built on farm cheaply, requires about a 400-day wait before you have a usable product,” says Mr Taylor-Davies.

An 80cu m reactor, filled with materials such as wheat straw, wood chip, maize, bean straw, chicken manure and clover, will cost about £300 to build and can treat 1,000ha, he says.

The advantage of creating your own is that the biology is adapted to your own fields, and full of diversity of bacterial and fungi species from your indigenous soil food web.

“Bought-in products are much more like a monoculture of bugs, whereas your home- produced compost or extract is full of billions of species.”

Biological amendments, such as those produced in a Johnson-Su bioreactor, can be applied direct to the soil as a compost, made into a slurry to treat seeds, or applied down the spout when drilling, he says. The amendment should kickstart the biology in the soil, improving soil health.

Reducing tillage is important for improving soil health, but on most farms it should be done in phases rather than as an overnight switch from a plough-based system to no-till, he says.

“Trying that will be catastrophic for most.” 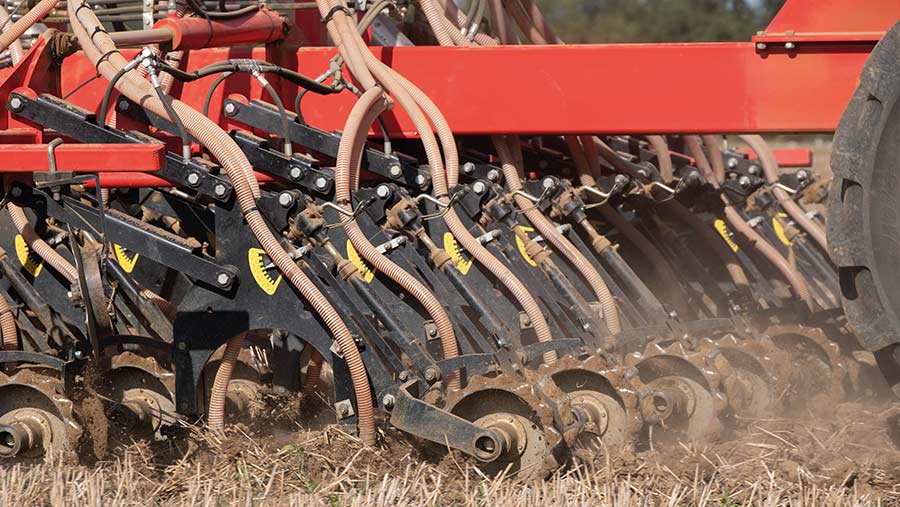 5. Add diversity to crops and rotations

Adding diversity has many advantages for improving soil health, but is also a quick and relatively straightforward way of reducing disease pressure in crops, he suggests.

“Some people are growing companion crops, such as in oilseed rape, or intercropping two crops such as spring oats and beans.”

Such diversity often means the whole is greater than the sum of the parts, and pest or disease pressure can also be reduced.

It is also possible to achieve a similar result within a species by using variety blends. For example, Danish research has shown that multi-variety blends in wheat crops reduce septoria pressure by about 10%. 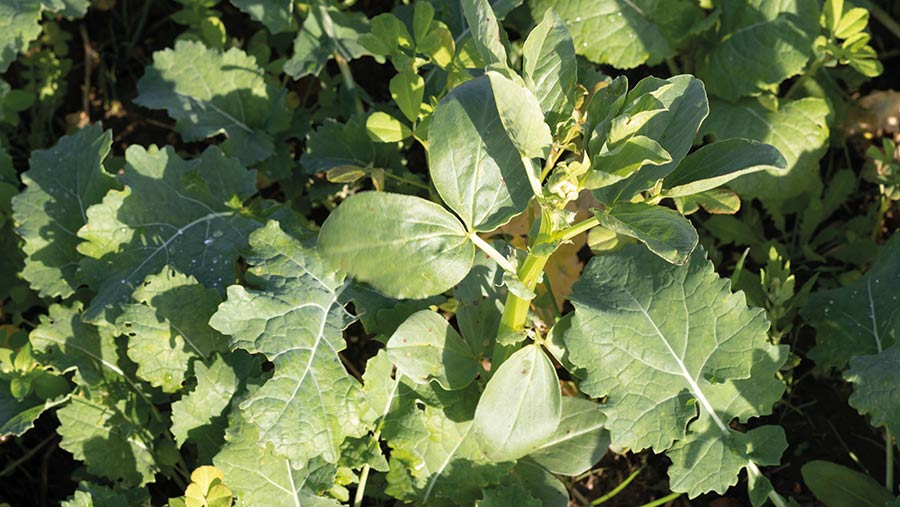 Oilseed rape with a companion crop of beans © Tim Scrivener

6. Use available nutrition in the soil

Once soils are functioning effectively, the potential for reducing fungicide use increases through the use of a balanced nutrition approach and adding biological amendments where necessary, Mr Taylor-Davies suggests.

Overapplying inorganic nitrogen fertilisers results in crop growth that is susceptible to disease.

Excess nitrates in the plant provide a food source for pests and diseases, therefore reducing fertiliser applications is an important consideration.

“As the biology in the soil improves, it will help make nutrients available to the plant, reducing the need for fertilisers,” he says.

A key step to determining nutrition requirements is using in-season plant nutrient analysis – but sap analysis rather than the more common tissue analysis.

Tissue analysis tests for the total nutrients present in the dry matter of the leaf, including in cell walls, which gives a view of the nutrients the plant has taken up, but not what might be available at that moment, he explains.

“Sap analysis is more like a blood test to find out what the plant has available at that time. You can compare old and new leaves, and see what is lacking and what is in excess.”

That information can then be used to react more quickly to the plant’s state of health, he says.

Typically, he uses three sap tests in the spring once rapid growth has started. “You’re not doing it to necessarily apply anything, but to make sure the crop is healthy.”

Healthy soil will provide a huge amount of nutrients for the plant, but if farmers do identify that something is lacking, it can be added as a foliar spray.

“It is far more accurate to base any applications on sap analysis results than applying 15 nutrients in one go and hoping one of them works,” he suggests.

That means having a good understanding of the roles of different nutrients in plant growth and how they interact with each other, he says “It’s one reason why fungicides are so popular – you don’t have to understand anything. You see a fungus, apply the product and it controls it.”

But if farmers can balance nutrition in the plant, generally that will get them out of most of the holes with disease control.

“With healthy soil and healthy plants, the chances are you will see very little disease.”

With a growing market for biological products – or “bugs in jugs” – Mr Taylor-Davies advises buyers to check the data behind the product. “There is very little data for some of them,” he warns.

It can also be easy to simply swap one form of input for another without saving much money and for little gain, he adds. “Where there has been scientific research explaining how they work, trials results and data sets, it’s much easier to  consider their role.”