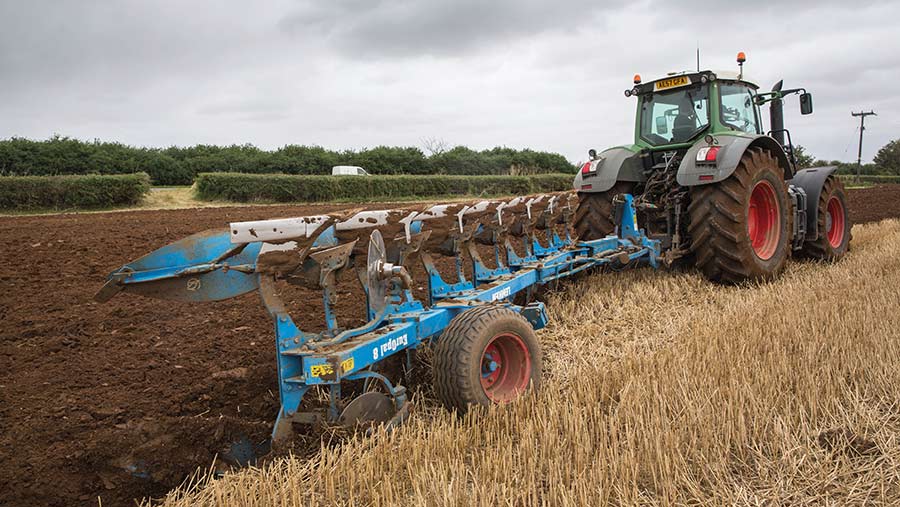 Establishment systems cover varying degrees of soil movement, from relatively little disturbance associated with direct-drilling and min-till through to deep cultivations and complete inversion with the likes of ploughing.

Each approach has its pros and cons, and no single approach will suit all situations, which often makes it challenging to assess which system will suit a farm’s cropping system the best.

Soil type, rainfall, weed pressure and drainage are just a few of the many factors that influence farmers’ cultivation choice.

We compare a range of cultivation practices to help farmers identify which establishment method may suit them this autumn.

Viewed as a “conventional” cultivation, ploughing is the deep inversion and burial of surface residues, working the soil at typical depths of 20-40 cm.

Although ploughing often produces good soil physical conditions, it can degrade soils over time, which is why ensuring plough conditions, setting and timing are appropriate.

He, therefore, advises growers when ploughing to consider:

This technique is a lower-cost alternative to ploughing, working the soil to 20-35 cm. Crop residues are mixed into the top soil, while any potential subsurface compaction can be restructured.

“Perhaps this technique is now coming out of fashion slightly, but it is certainly worth mentioning.

“Growers should know the depth of compaction they want to mechanically restructure and set the machine to just below this depth,” says Mr Henderson.

Most often used where cereals, pulses and oilseeds are grown in the rotation, this technique involves shallow surface movement at 5-10cm using discs or tines.

The method requires controlled traffic farming and/or low ground pressure technologies to avoid deeper soil damage. Most crop residues remain on the soil surface and it can be combined with low surface disturbance loosening as a separate operation.

Rather than cultivating an entire field, this technique cultivates the strip in which crops grow, working at a depth of 5-10cm.

Again, most crop residues remain on the soil surface and in some situations this method can be considered a form of direct-drilling.

Direct-drilling is a one-pass establishment system without a prior cultivation pass.

Two types of drill can be used, these being a cultivator-type, tine-based drill, which involves some soil movement and a no-till disc drill, which moves as little soil as possible.

Sometimes, the technique can use a form of cultivation to loosen topsoil before seed placement, but where no soil movement occurs, this is known as “no-till” or “zero-till”.

“No-till is a specialist operation that takes quite a sizable change in a farming system to make it work well,” says Mr Henderson.

However, when used appropriately it can benefit soil biology and fertility to make soils more resilient.