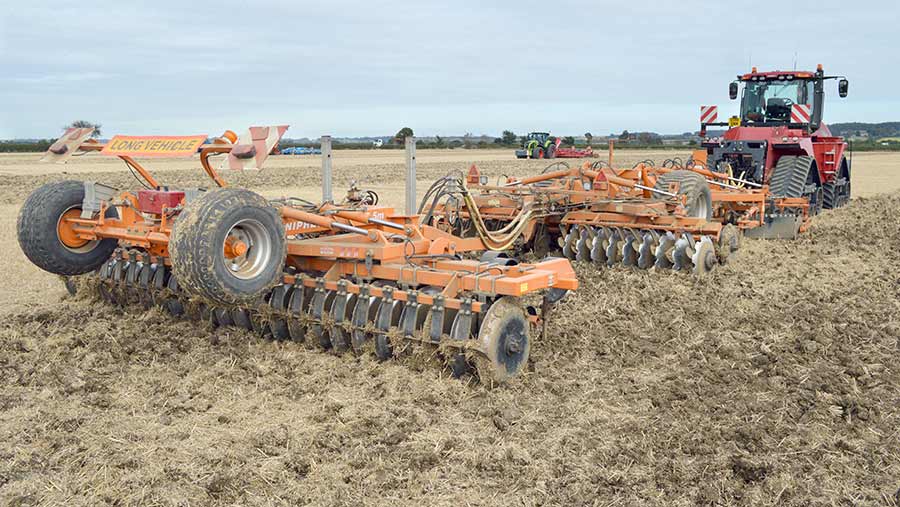 Lincolnshire grower Andrew Ward is achieving bumper spring barley yields on his heavy land by cultivating early after the combine, and he now hopes to cut establishment costs and reduce soil consolidation.

He is looking at shallower cultivation methods to reduce fuel and labour costs, while enhancing soil structure, which is particularly important when faced with falling grain prices and loss of some key agrochemicals.

Currently, Mr Ward cultivates to 250mm in a one-pass operation and this has created excellent soil conditions over the years, producing spring barley yields from the variety Irina up to 9t/ha.

“We now want to work shallower to minimise fuel and labour costs, reducing establishment costs by at least 25%,” he tells Farmers Weekly.

There has been no plough on the 650ha farm since 2002, with all primary cultivations conducted with a 5.5m Simba Solo disc-tine-press cultivator, pulled by a 620hp Case Quadtrac. A Simba free-flow 8m tine drill follows in March drilling to a depth of 30mm.

Mr Ward aims to structure his soils early after the combine, and has three-quarters of his land destined for spring cropping ready for drilling before his oilseed rape sowing commences on 25 August.

“The key is to work the land as early as possible behind the combine if conditions are dry and remember that soil has a good memory – if you work it dry in the winter it will stay dry in the spring,” he adds. 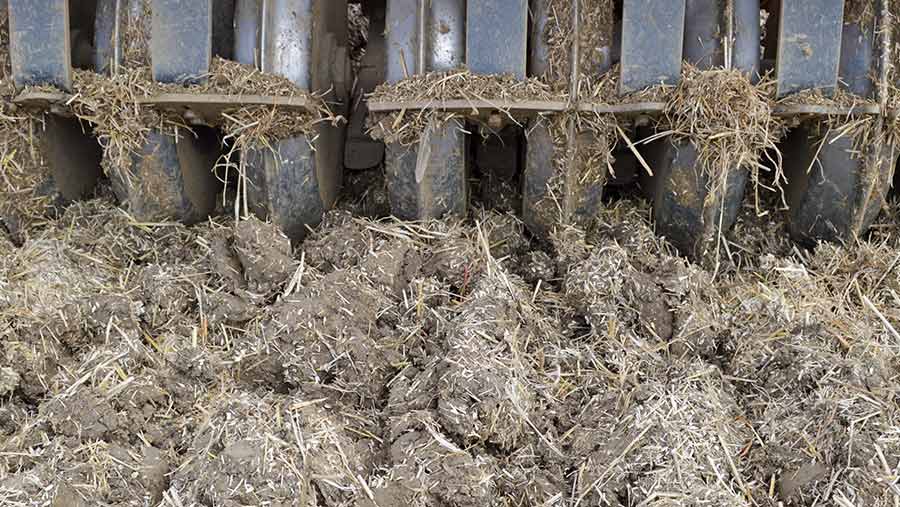 His soils are in good heart with organic matter at 3%, having doubled in the past six years, but he now feels current cultivation practices could be too deep, leaving the soil more vulnerable to compaction.

The current Simba Solo cultivator used on the farm is destined to work at depth and with widely spaced tines would not bring up enough soil if worked at a shallower depth.

Very heavy rainfall in Lincolnshire in June put the soil structure under pressure and consolidation from big machinery was still evident post-harvest, so focusing his attention of his soils.

Philip Wright, independent crop consultant, believes shallower, less-intensive cultivations at 125-175mm would create a more supported soil structure with a reduced consolidation risk, and would not operate in the deeper more moist, or plastic, soil level.

“I suggest working above the plastic zone and using roots to open up the moist plastic level as little good can be attained by cultivating here,” he explains.

The agronomy group Agrii has arranged for a number of machinery manufacturers to demonstrate their cultivators across Mr Ward’s land to see which could achieve the ideal cultivation technique for his farm.

This trial will continue in the spring with a number of different drills being tested across each of the different cultivation practices.

The group’s trials manager Steve Corbett says the farm’s heavy silty clay loam soil must be weatherable and survive heavy rains, while allowing water infiltration throughout the soil profile, ahead of spring drilling.

“The key to this heavy land is moving the soil early after harvest and to move just enough soil to create a good surface tilth for spring drilling,” adds Mr Corbett.

David Felce, Agrii’s regional technical adviser, who also farms at Midloe, St Neots, in Cambridgeshire, has seen soil improvements from the use of a 150mm-deep, low-disturbance tine cultivator and by also growing cover crops on his 100ha of chalky boulder clay.

“It’s important to try and maintain order of soil horizons to create a column soil structure that supports weight,” he says.

Cultivations are used to improve the soil structure while cover crops hold the structure in place, with the workability of soils being greatly enhanced. He uses a phacelia/mustard mix, with the first helping to produce a good surface tilth and the second helping to dry out the soil.

“The combination of both metal and roots can provide optimal soil friability,” he explains.

Mr Felce limits his cover crop seed costs to £30/ha with the expense offset by the reduction in  traditional cultivation methods and yield benefits after three to four years.

Andrew Ward drilled just over 200ha of oilseed rape in 2018, but 80ha was ripped up in October due to drought and cabbage stem flea beetle damage. This resulted in his drilled oilseed rape area being cut to just over 30ha this season. With a reduced area of this break crop he is planning to grow continuous winter wheat on his blackgrass-free land and continuous spring barley on any fields which show any sign of blackgrass returning.